Gegard Mousasi left the UFC last year after they couldn’t come to terms with pay. Mousasi was more than happy to sign with UFC’s rival, Bellator.

Mousasi made his debut in a bloody war with Alexander Shlemenko. He broke his right orbital in the first minute of the fight and fought the rest of the battle with one eye. Mousasi scraped through with a split decision, earning him a MW title shot.

Champion Rafael Carvalho was on a 15-fight win streaking dating back to 2012, before he met his match in Mousasi. 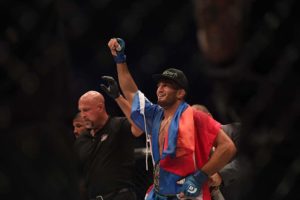 Rafael Carvalho, who was about to defend his title for the 4th time, didn’t seem all that confident heading into the cage. Mousasi was his usual self, giving away no emotion.

The opening moments were tense, with neither of them willing to throw the first strike. However, when Carvalho had his first kick caught by Mousasi – that was the beginning of the end. Mousasi promptly took him down and started to rag doll him around. Mousasi got the transition into mount and then took Carvalho’s back. Mousasi rained down hard GNP, while Carvalho’s was doing nothing to protect himself. Ref Dan Miragliotta was forced to stop the fight at 3:35 seconds of the very first round.

Mousasi made shockingly light-work of the former champ to become the first ever Bellator and Strikeforce champion.

Mousasi then called out Bellator WW champion Rory Mcdonald to a super-fight.

“That’s the fight we want. I do respect him a lot – he’s a tough fighter. But I think we’re going to push for that fight. We’re going to call him names until he takes the fight.”

Gegard Mousasi vs Rory Mcdonald – sounds like a potential ‘fight of the year’ contender.

UFC: Georges St-Pierre says the Nick Diaz fight is ‘not worth it’, opens up about future plans