Bellator: Nick Newell campaigns to Scott Coker for a fight in Bellator 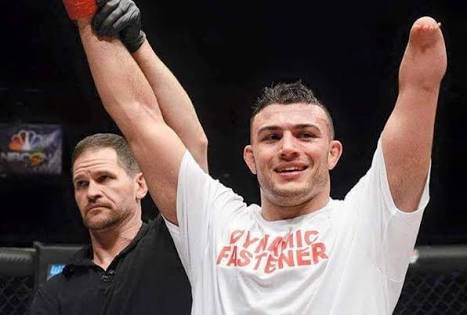 Bellator will be returning to the state of Connecticut once again for a card in near future.

As the news broke out, a Connecticut’s son desperately desires to be on the card, none other than infamous one-handed bandit Nick ‘The Notorious’ Newell. (via Twitter):

Hey @ScottCoker I hear @BellatorMMA is coming to CT again? Nobody in CT is more popular or puts more asses in seats then I do & I am available pic.twitter.com/b0errX3jEe

Newell was born with congenital amputation of his left arm which ends right below his elbow. Before turning pro, Newell had an impressive amatuer record of 5-1. From not finding opponents, Newell eventually reached a stage where he was knocking on the door for a UFC contract with an even more impressive record of 14-1. Newell’s only loss being against WSOF champion Justin ‘The Highlight’ Gaethje who is now the #6 ranked Lightweight in the UFC.

On October 17,2015, Newell announced his retirement from the sport. However on March 9 2018, Newell came out of retirement to face Sonny Luque at LFA 35. This was his debut with the promotion. Newell quickly took Luque down and choked him out in the first round.

After a lot of campaigning, Newell finally got an opportunity to compete at Dana White’s Contender Series against Alex Munoz. A victory could have presented a strong case for Newell to fight under the UFC banner however Newell felt short against Munoz which ended his fairy tail at least for now. A chance given by Bellator can be redefining for his career.