There has been a lot of speculation surrounding a potential fight between former UFC light heavyweight champions, Tito Ortiz and Chuck Liddell. It all started with Ortiz calling out Liddell. Things have escalated pretty quickly and the two veteran legends are now ready to resume their eternal rivalry with another fight. However, one man who has himself been involved in a recent rivalry with Ortiz is “The American Gangster”, Chael Sonnen. Sonnen and Ortiz have a lot of bad blood and now he has responded to the rumours of Liddell moving to Bellator to fight Ortiz. He took to Twitter and asked whether Liddell’s first bout in Bellator going to be a loss to Sonnen.

“The people’s champ” is a legend of the sport with a record of 31-15-1. He also holds notable victories over fighters such as Michael Bisping, Nate Marquardt, Mauricio Rua, Wanderlei Silva, Quinton Jackson, etc. Although, he has been involved in a lot of heated rivalries, his most memorable beef was with Anderson ‘Spider’ Silva. His fights and rivalry with Silva propelled him to main-stream stardom and he even came an inch away from getting his hands at UFC gold in his first bout against the ‘Spider’.

Sonnen was previously submitted by Ortiz at Bellator 170. On the other hand, Ortiz and Liddell have fought twice before, with Liddell winning both fights with relative ease. Liddell had famously knocked-out Ortiz in his prime back at UFC 47. He then again got the better of “The Huntington Beach Bad Boy” via TKO at UFC 66. The pair recently resumed their rivalry after Ortiz called out Liddell in an interview. There has also been a lot of hearsay that Liddell might be joining Bellator MMA.

“The American Gangster” has now apparently called-out Liddell. He also hinted towards a big announcement coming from Bellator tonight. The former UFC title challenger sent out a rather cryptic yet interesting tweet. Here’s what he tweeted: 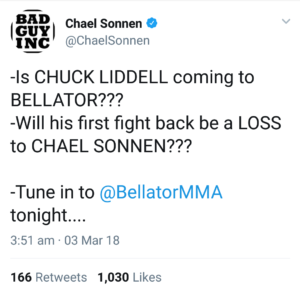 UFC president Dana White recently shot down the idea of a trilogy fight between Liddell and Ortiz stating that “fifty year old’s shouldn’t be fighting”. White has merit to his statement and even thought a trilogy bout will be exciting, it should not happen since Liddell is already forty-eight years old. “The Iceman” should think about his health and about the fact that he has already beaten Ortiz twice in his prime. He is a legend who has doesn’t not have the need to prove anything.