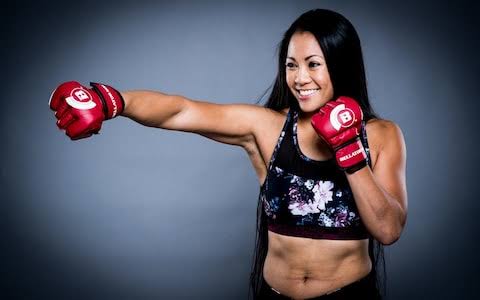 Bellator Flyweight Ana Julaton posted on her Instagram account that she is retiring from combat sports both MMA and boxing.

Her retirement story read,”Earlier today, I spoke to my long time promoter/advisor Mr. Allan Tremblay who has been a father, a friend and mentor throughout my entire professional sports journey. I told him it was time for me to move on from fighting.After that very deep and emotional conversation,I spoke to Mr. Scott Coker next and thanked him for allowing me to be a part of @BellatorMMA (Bellator).As a competitor inside the ring and cage, I’m confident in leaving combat sports fully knowing there are so many wonderful, passionate and hardworking women continuing to carry the torch as a guiding light for the bright future of our arena.For all who have been positive and continue to create a stage for all my sisters in the arts, all the organizations I have fought for…Thank you.Moving forward to my next journey, I am officially retiring from professional fighting. Thank you everyone. I’m truly humbled and deeply honored for you all allowing me into your lives and hearts. I’m forever grateful.”

Julaton had an MMA crossover from boxing.She became a pro boxer in 2007 and went on to win WBO and IBA super bantamweight titles.He had an impressive record of 14-4-1 in the boxing ring.She turned to MMA in 2014 and signed with ONE FC where she went 2-2.She then signed with Bellator in 2017,but lost to Lisa Blaine via split decision at Bellator 185 and then lost to popular Heather Hardy via unanimous decision at Bellator 194.

Heather Hardy (2-1 in MMA,2-1 in Bellator) being a former boxer turned into MMA fighter,their fight at Bellator 194 was a much anticipated one.After their bout,their boxing promoters planned that they’d box each other at an another date.

Being from the same background, Julaton wished Hardy good luck in her retirement post,”I’d like to thank @HeatherTheHeat (Heather Hardy)for sharing the cage with me and I wish her all the very best in her combat sports career both boxing and MMA.”

UFC: Anthony Pettis speaks out about his troubles

Previous articleUFC: Jessica-Rose Clark unhappy with the police over the case of her home being robbed
Next articleUFC: Interim Welterweight Championship bout between Rafael Dos Anjos and Colby Covington targetted for UFC 224 in Rio