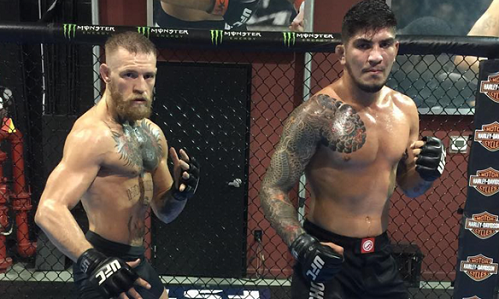 Dillon Danis set to make his much anticipated Bellator debut on April 28,2018 at Bellator 198 in Allstate Arena,Rosemont,Illinois.Danis will train at the world renowned Straight Blast Gym in Ireland owned by John Kavanagh,also the training ground of the Current UFC Lightweight Champion ‘The Notorious’ Conor McGregor.

Danis’s opponent hasn’t been finalized yet,but he is expected to fight on the Paramount network main card and will fly to Dublin next week to start his training camp.

Even though Danis has been competing in Jiu Jitsu since 2015,he rose to fame in the MMA community when Conor McGregor brought him in as a training partner for his rematch against Nate Diaz at UFC 202 in August 2016.Although McGregor’s head coach John Kavanagh is also his BJJ coach as he holds the honor of being Ireland’s first ever jiu-jitsu black belt,McGregor wanted to bring in Danis to match up to Diaz’s skilled ground game.Danis also served as a training partner and corner man for McGregor’s fight for the UFC Lightweight Championship at UFC 205.

At 15 years of age,Danis decided to train Jiu Jitsu.Danis also started training wrestling at Parsipanny Hills.Hence a transition to MMA should be relatively simple for Danis.At the age of 17,Danis went through the jiu jitsu belt system at Jamie Cruz’s academy.At the age of 19,he decided to move to New York and train solely at Marcelo Garcia’s academy.

Danis has faced well known names in Jiu Jitsu such as Gordon Ryan,former UFC Welterweight Jake Shields,Current UFC lightweight bonus machine Joe Lauzon,AJ Agazarm and another fellow BJJ artist turning to MMA who would be making his debut on March 24 for ONE FC Gary Tonon.(via YouTube):

ONE Championship: Garry Tonon to make MMA debut at ONE: Iron Will

Previous articleUFC: Alexander Gustafsson reponds to Luke Rockhold’s comments
Next articleUFC:One-handed MMA fighter Nick Newell wants his place in the UFC roster after improving to 14-1 with quick win at LFA 35