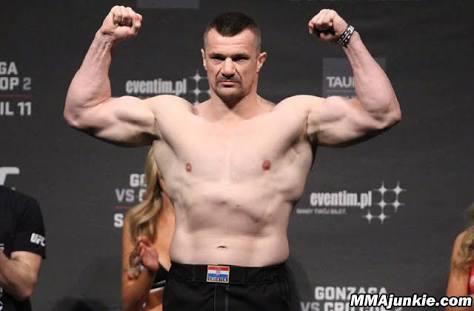 Speculations began to arise on a probability of Cro Cop signing with Bellator.Bellator with their tweet confirmed that Cro Cop has signed with the organization and will his debut against heavy handed Roy ‘Big Country’ Nelson(23-15) at Bellator 120 on May 25 in London.(via Twitter):

This would be a rematch,in their first outing Nelson defeated Cro Cop via TKO in the 3rd round at UFC 137 on October,2011.Cro Cop is considered as a legend of the game due to a number of accomplishments on his resume.Naming a few,Cro was a grand Prix Championship winner in three organizations namely K-1,Pride and Rizin making him the only mixed martial artist to win three World Grand Prix championships.He is also only one of the two fighters win a world Championship in Kickboxing and MMA.Cro Cop is known for his vicious head kick and also known for brutal knockout skills making him the fighter with most finishes,most first round finishes, most head kick knockouts, most wins via kicks,second most knockouts,second most knockdowns in Zuffa,LLC(UFC,Strikeforce,WEC,Pride)History.

Cro Cop despite being 43 years of age, comes in on a 7 fight win streak with last 5 of his victories in Rizin.All of his wins were finishes including a victory over former Strikeforce Light Heavyweight Champion and Rizin Heavyweight Grand Prix winner Muhammed ‘King No’ Lawal.Before that he avenged his loss against Gabriel Gonzaga in his UFC return on April,2015.Gonzaga gave Cro Cop a taste of his own medicine by knocking him out with a head kick.

Nelson on the other hand(1-1 in Bellator) is coming off a loss against veteran Matt Mitrione in the Bellator Heavyweight Grand Prix at Bellator 194 on February, 2018.

- Advertisement -
Previous articleUFC: Hector Lombard plans on appealing his DQ loss against C.B. Dollaway
Next articleUFC:Frankie Edgar breaks silence after 222 loss,says he’s,”ready to put it all on the line again”