Ben Askren and DJ wish each other well after historic trade

Johnson is the longest reigning champion in UFC history but his head coach Matt Hume serves as an executive vice president at ONE Championship and there’s a big fight for Johnson against ONE contender. Johnson was considered the pound-for-pound best fighter in the world until his Aug. 4 split-decision loss to Henry Cejudo in a flyweight title fight in Los Angeles. 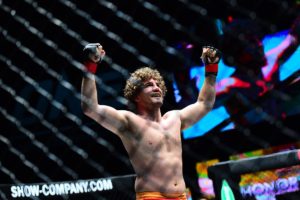 34-year-old Askren, a former two-time NCAA wrestling champion has had his fair share of beef with UFC president Dana White, when he called Askren “the most boring fighter in MMA history.

Both Ben Askren and Demetrious Johnson appeared on The Ariel Helwani’s MMA show wished each other well, and Ben went ahead and praised Johnson, ” I think DJ is gonna nail it, he is a great guy, very intelligent and well spoken and he will be able to handle himself just fine.”

Meanwhile, Ben Askren has been on a run on Twitter as he has been calling out every other guy in the welterweight division and also wants a super fight with Khabib Nurmagomedov.

All the MMA fighters that Ben Askren has put on blast

Previous articleJimmie Rivera wants to break the top 3 BW ‘love triangle’ up
Next articleAnthony Smith on Volkan win: ‘I could hear the blood gurgling in his throat’