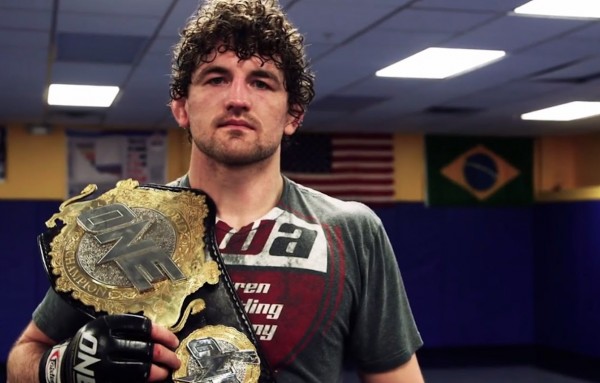 “So when I was 12-0, I had my last fight in Bellator against Andrey Koreshkov on July 30, maybe 31, of 2013 and I beat him up pretty good. I had a 12-month matching period, so what was expressed to me by the UFC brass was that you need to get out of your matching clause and we will make you an offer, but, we won’t make you an offer until that happens. So I called Bjorn [Rebney] and I said, ‘Hey Bjorn, I’m not going to re-sign, let me go. Bjorn had a terrible reputation, but I never had a problem with him, we never butted heads too bad. Anyway, I said Bjorn, I don’t want to come back, but people say that they didn’t want me back, but that’s not true at all, but every day, I was like, ‘Bjorn let me go, Bjorn let me go,’ and I love challenges. There’s nothing more in the world that I love than a challenge. Go through my wrestling career, it’s what I’m all about, taking the next best single thing every time. So all this time, Dana and the UFC are saying, ‘We want Ben Askren. We want Ben Askren.’ I’m ranked number 7 in the world and 12-0 and so, I was going to the Asian store because I was going to make some Tom Kah soup and Bjorn called me and said, ‘You’re released. You’re released, you can go.’ I said, ‘I appreciate that.’”

“So Friday morning I go, it’s in November some time, mid-November. So they fax over the release and my manager faxes it over to UFC headquarters and in the afternoon, there’s a media scrum where one of the questions was asked about me and Dana [White] said, ‘We aren’t interested in Ben Askren,’ and I was like wait, what’s just happened there, because for the last three months they were saying they were interested. Now, I finally produce this full release from Bellator, which was a miracle that I got, and now they aren’t interested. So I was like, wow, I just got caught in the middle of this.”

“I was like f’ that and I bought a plane ticket to Vegas for Monday. I was like fuck that, I’m not taking this shit, I’m going to Vegas. So on the Monday, I fly out to Las Vegas to the UFC headquarters and I sit with Lorenzo Fertitta and Dana is on the speakerphone. They offered me a Zuffa contract, but it would be confidential and that I would have to fight one fight for World Series Of Fighting, which was like, that’s bizarre. I think the old relationship between the old WSOF and UFC was pretty hazy, but people went the other way, right? Like Andrei Arlovski got dropped into World Series, Anthony Johnson, boom, all these people. So they said one fight in WSOF and Zuffa will pay you, but you do one fight. So that was f’d up, but OK. I don’t think they thought I was going to go for it, but I said I’d do it. So I leave, and about six hours later and I got a phone call saying that deal is no longer available, we aren’t’ going to make you an offer. So, wow.”

“Here’s my guess and I never got to sit face-to-face and say what was your problem with me. There are four things in my mind. Number one, he didn’t really like me, stemming from the, I called him out on the steroid thing where he said it’s impossible to test all UFC athletes. I said that’s not true because USADA does it all over the world for all sorts of sports. You can do it, but it’s just expensive so let’s just call it what it is. They do it now and I was correct, but when Dana is wrong in an argument, and he’s got this huge army that following him and I think his quote was, ‘I’d rather watch flys fuck than Ben Asken fight.’ So the personal attacks started and that’s number one.”

“Number two, my fighting style isn’t highly attractive. I also think that’s a little bit of fake news because if you look at Georges St-Pierre, consistently, now Conor McGregor has trumped him, but if you look on a consistent basis Georges has been the biggest draw. He heavily relied upon takedowns and ground and pound.”

“Three, I think they wanted to take a key piece from Bellator. Four, I think they really believed I could be their champion and having a champion from Bellator transition right into the UFC and become champion, remember Bellator was going to Spike around now, and Bellator could’ve used that to say they’re the same.”

“I’ve never had the chance to sit down with Dana and ask why there was no offer. You know when like Anthony Pettis was the champ and I’m helping coach him and I think Tyron was, I’ve never had more than five words with Dana in passing right and so it would be really interesting for me to sit down and talk and say ‘tell me for real.’ I’ve got my assumptions on what the deal was, but I don’t really know.”