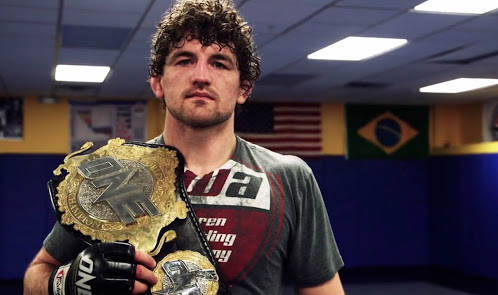 Ahead of their fight at UFC 230 both Nate Diaz and Dustin Poirier are trying to convince UFC President Dana White to make a new weight division(165 pounds) and let their fight be for an inaugural title bout at 165 pounds.

Both the fighters have been active on their social media accounts, trying to persuade UFC President to make this new division.

But a veteran MMA fighter seems unhappy with this request of Nate Diaz.

Replying to the tweet of Nate Diaz, Ben Askren said, “Nothing about you is very scary. Arms the size of a noodle, takedown defense like a middle schooler and very amateur smack talk. I highly doubt anyone is scared of someone who is 6-6 in his last 12.”

Nothing about you is very scary. Arms the size of a noodle, takedown defense like a middle schooler and very amateur smack talk. I highly doubt anyone is scared of someone who is 6-6 in his last 12. https://t.co/jVR5XJiERA
— Ben Askren (@Benaskren) September 28, 2018

Those who are casual MMA fans may don’t know that Ben Askren is regarded as one of the best welterweight fighters of all time. Retired with a fighting record of 18-0.

Fans are expecting fireworks both on social media and on Nov 3 as UFC 230 marks the comeback of Nate Diaz after more than two years.

Previous articleYou’ll never guess which UFC champ champ was in attendance at Bellator 206
Next articleShocker: Nate Diaz hasn’t agreed to UFC 230 fight with Dustin Poirier yet?!