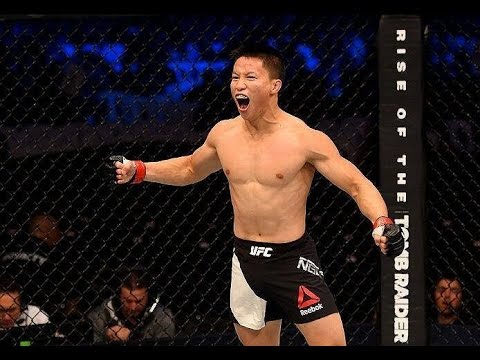 Up-and-coming UFC Flyweight Ben Nguyen who is currently the #8 ranked Flyweight has revealed that his new year’s resolution this year is to make his way into the top five of the Flyweight rankings. He also claimed that he believes that he is the most suited to fight the champion Demetrious Johnson and has a style that can counter him effectively.

“Mighty Mouse” last fought and submitted Ray Borg via an arm-bar at UFC 216. With his victory over Borg, he created history by creating a record for the most consecutive title defenses. He is currently on thirteen fight win streak and is probably all set to defend his title against the UFC Bantamweight champion, T.J. Dillashaw. On the other hand, Nguyen has a UFC record of 4-1 and is currently on a two fight win streak. He is coming off of a first round submission victory over Tim Elliot. 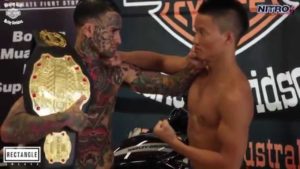 “Ben 10” is currently scheduled to fight Jussier Formiga at UFC 221. In an interview given to MMA Junkie Radio, he revealed his intentions of breaking into the top five with a win over Formiga and about his plan of dethroning “Mighty Mouse”. Here’s what the internet sensation told MMA Junkie Radio:

“I plan on taking him out and taking his spot (Formiga’s), and maybe even get a title shot, We’ve been working a lot of back defense and submission defense, (Formiga’s) striking has been looking a little better. I wouldn’t say it’s one of the best, but it’s there.

In my head, there would be many ways to finish a guy, you know me from the viral video. I’m more of a puncher counter-striker. But in my last fight, I ended up rear-naked choking Tim Elliott out of all people. So I feel like there’s so many different ways to finish, and if it’s there, I’ll take it.

Nguyen surely has a lot of potential and might become a UFC champion some day. However, defeating Johnson is a herculean task and the relative new-comer might be underestimating the champion. For now, he should focus more on his next opponent and on breaking into the top five.