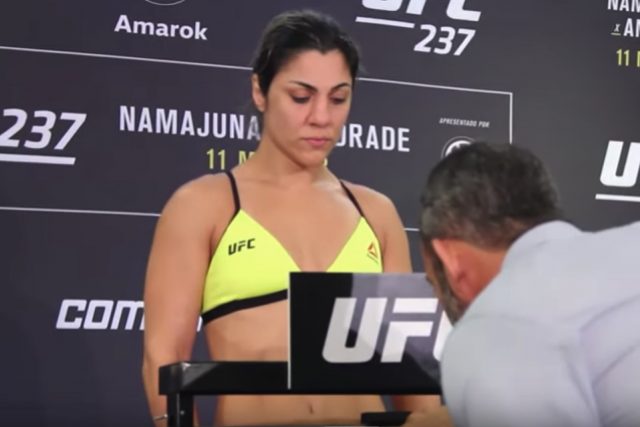 UFC women’s bantamweight fighter Bethe Correia will make her return to the Octagon, after a gap of more or less two years away at Saturday’s UFC 237 event which will take place in Jeunesse Arena in Rio de Janeiro, Brazil.

Her opponent is Irene Aldana, a rising star.

Correia’s return has not started off so all that good. At the official UFC 237 weigh-ins, Correia missed weight by an alarming five pounds over the bantamweight title fight limit of 136 pounds.

This marks the first time Correia missed weight in her UFC career.

She had not fought since a brutal knockout loss to current title contender Holly Holm in June 2017. Her fight with Aldana will proceed after CABMMA clarified that Correia must forfeit 30 percent of her purse to her opponent.

Bethe Correia was fined 30 percent of her purse after registering 141 pounds for her #UFC237 bantamweight clash with Irene Aldana, but the contest will go on as scheduled.

Correia went toe-to-toe with Holly Holm at UFC Fight Night: Holm vs. Correia on June 17, 2017 in Singapore. She lost the fight via a head kick knockout in the third round.

Correia was then scheduled to face Irene Aldana on August 4, 2018 at UFC 227. The bout was pulled from this event as Correia was forced to withdraw due to injury. The fight was not replaced.