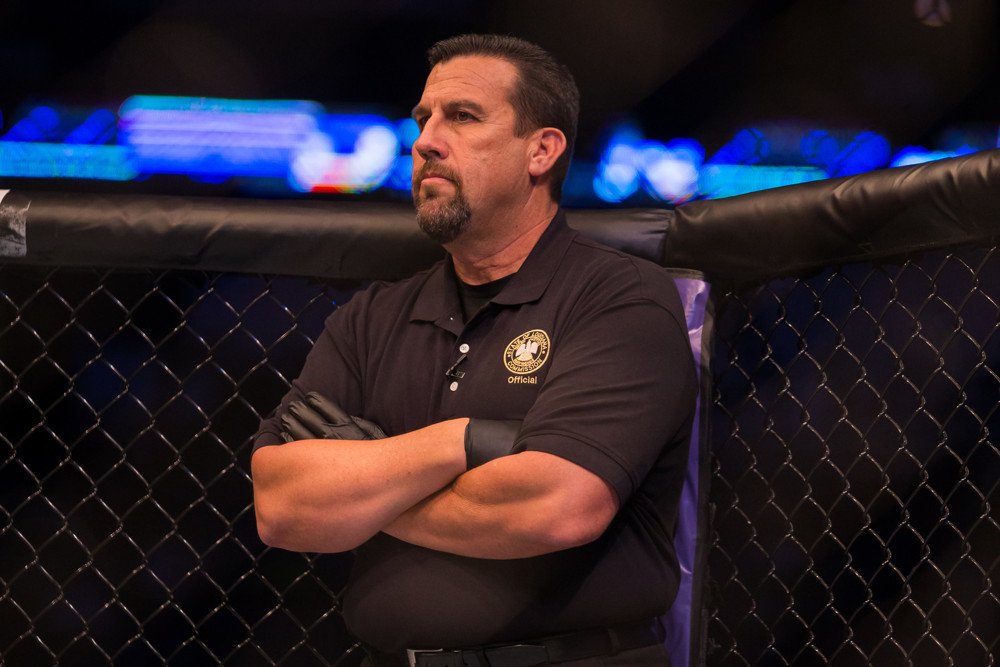 John Michael McCarthy is an American mixed martial arts referee, perhaps best known for his officiating of numerous bouts promoted by the Ultimate Fighting Championship(UFC) dating back to UFC-2, Known to fans as “Big” John McCarthy, he took a brief sabbatical from officiating toward the end of 2007 to pursue a career in television commentary for The Fight Network and also provided commentary for Affliction, before returning to his role as a referee in 2008. McCarthy is also a former Los Angeles Police Officer, and a Tactical Self-Defense Instructor at the Los Angeles Police Academy, as well as the founder of C.O.M.M.A.N.D: a training and certification school for MMA referees and judges.

McCarthy has been hired to be a color commentator on Bellator MMA broadcasts, Big John is not retiring as a combat sports official though. The legendary MMA referee said that is where is focus will lie now.

“Can I go and referee? Yes, I can go and referee, If I want to go and referee something internationally, I can do it. I can do small shows here if I want. I’ll do charity events and things like that. I’m not gonna say, ‘Oh, I’m retired.’ I’m not retired. At this moment, I’m just taking on something else, so that’s gonna go on the back burner. All of my attention is gonna go toward being the best color commentator I can be for Bellator.”

“I love officiating, I love what I do. I love the people that I get to work with. I love all the fighters. But when I say I’m walking away, I’m walking away from what people are gonna expect. They think that I can commentate Bellator and then go ref a UFC — that ain’t gonna happen. I’m gonna be stepping away from what most people see of me as a referee. I’m still gonna work with athletic commissions.”
“That injury made me kind of relook at things,” McCarthy said. “I don’t want to be a guy who’s holding on or stepping into the cage when there’s somebody else that can actually do a better job, because I’m not prepared.”

“I’m here for the entire aspect of the fight. What the fighters are doing, why someone is being successful, what the other person has to do to counter what they’re being successful with. That’s all stuff that they’re hearing now. But there’s nobody right now that’s out there that can explain and educate to the fans the rules of the sport and why fighters need to do something or why judges are going with one fighter over the other in a specific situation. I think I bring that — even at this early start of my career in commentating — I bring that to the table, while a lot of people are guessing when they’re putting something out.”

“I say this and I don’t want anyone to think I’m egotistical in this, but in the realm of refereeing, where could I go?” McCarthy said. “I was doing two to three to four shows a week and I was running my ass off all over the place. But I got to do the greatest fights there were. I could not complain about anything that I was given as a referee. And there’s only once place for me to go and that’s down. I always told myself I was gonna walk away from that situation before someone told me that I needed to walk away, because I wasn’t doing the right things. This was an opportunity that presented itself to me that excites me. It made me where I was like, you know what, that’s something that I can work at, that’s something that I can be good at.”

“There’s a ton of work that goes in,” McCarthy said. “That’s why Jimmy Smith was so good, that’s why Brian Stann was so good. They put in the work ahead of time to make themselves successful. And I’m smart enough that I follow smart people. If I see someone doing something that’s the reason they can be successful, I’m gonna grab onto what they’re doing and I’m gonna follow it. I’m gonna put in a ton of work to make myself successful, because I will not ever be ill prepared for standing in front of the camera or putting on a headset and telling people what’s going on in a fight. My promise is I will always work my ass off to be the best that I could be.”

“It isn’t even part of my thought process right now,” McCarthy said of high-level MMA reffing. “My whole thought process is getting ready for Jan. 20 in Los Angeles, making sure that I have everything that I need to cover what the fighters are doing, how their styles match up and to put out good information to the fans, so they can enjoy the fights.”

Previous articleThe Game of Worth: Conor McGregor Is Precious and the UFC Knows It
Next articleGunner Nelson is willing to fight Darren Till in London