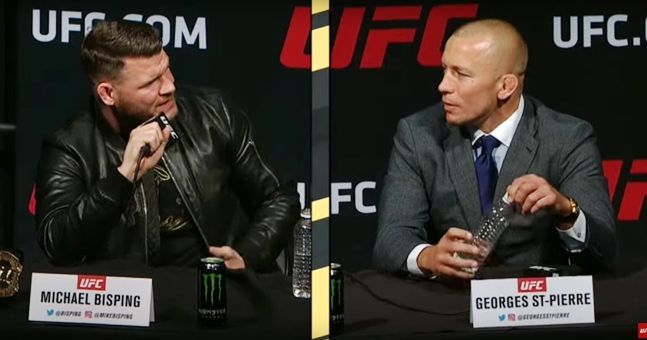 Michael Bisping while co-hosting the FS-1 show ‘UFC Tonight’ announced that his fight with George St Pierre has been confirmed to take place at UFC 217 which will be taking place on Nov 4th at Madison Square Garden in New York City.

The fight has been on and off for a while now after an initial press conference took place to announce the fight between Bisping and GSP. Then it lay on ice for a while when GSP said he would require some time to prepare while Bisping was also nursing an injury.

Dana White then announced at a pre fight press con of UFC 214 that the winner of the Tyron Woodley-Demian Maia fight would get to fight GSP and then famously retracted it after the fight wasn’t as exciting as people hoped. This is was followed by Tyron asking Dana to apologize and then both of them making up and laying the matter to rest.

Let’s hope the Bisping-GSP fight does take place at the Madison Square Garden which would be an appropriate setting and venue for this fight.