Last month, former UFC champion and Hall of Famer BJ Penn got knocked out by a man in Hawaii. TMZ released the video of the brutal KO where Penn can be seen lying flat after getting punched hard in the face.

Although, a family friend of BJ Penn released a statement saying that the former UFC champion wasn’t in the wrong and was indeed hit by a cheap shot by the shirtless man. 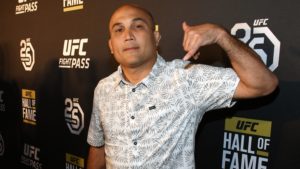 Now BJ Penn himself has opened up about the incident in a recent interview with Aaron Bronsteter of TSN.

BJ Penn gives his side of the story of what took place in videos of him in an altercation released recently by @TMZ.

“The last thing I want to do is get into any type of trouble, my custody case, me seeing my kids depends on all this stuff"

I’m at a concert going to meet a friend that I’ve known since we were really young kids and I’m over there and an acquaintance of mine, he gets mad about something, you know something was said or it was an old past thing and then he wants to fight about it.

I was like, ‘no, no, I don’t want to fight, we’re friends, everything is cool. He even walks outside and I’m thinking, this is silly I’m going to go get him, calm him down and get him to come back inside and enjoy the concert, we’ve got some other friends there.

Whoever put that video up cut it in half, I wish they had the whole thing that showed me trying to hug the guy. Finally my adrenaline picked up because he was hitting me so much so I said go ahead and hit me again, really I thought the guy would eventually just say forget it BJ, whatever, walk away, but he hit me and he hit me good and knocked me down and then when I got back up he tried it again and I just had to defend myself and that’s what you see in the second video.” H/t Credit: TSN

BJ Penn has also been struggling inside the Octagon as he hasn’t won a fight in nearly a decade. His last win came against Matt Hughes at UFC 123 back in 2010. He last fought against Clay Guida at UFC 237 in Rio De Janeiro.

Matt Serra not on the BJ Penn retirement bandwagon