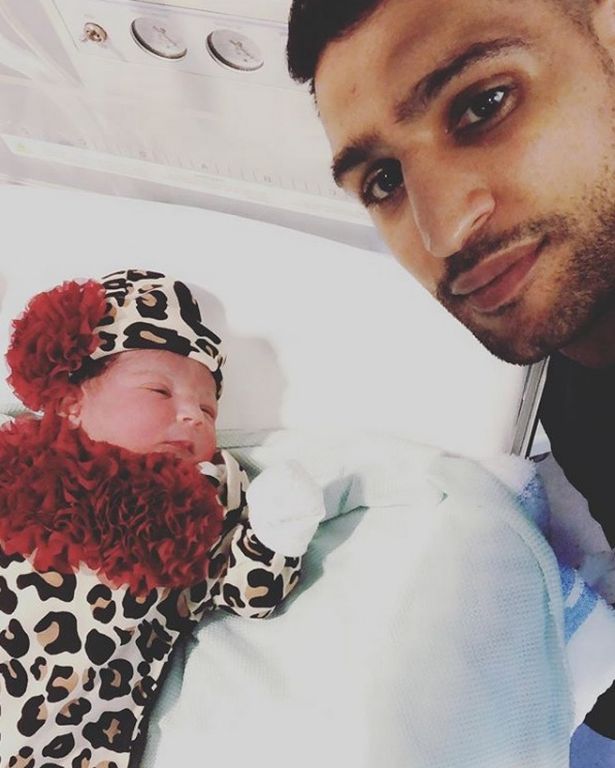 BOXER Amir Khan thinks the latest addition to his family is just knockout after announcing his wife Faryal Makhdoom has given birth to a daughter. Amir, fresh from his victory in the ring against Phil Lo Greco in Liverpool at the weekend, has taken to Twitter just days later to post a charming picture of him with newborn baby Alayna Khan. 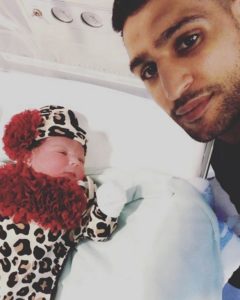 The 8lb 3oz baby is dressed in a hat and leopardskin outfit. Amir took to instagram to post the pic of his daughter.

Amir and Faryal, who married five years ago, already have a three-year-old daughter, Lamaisah. Faryal, aged 26, announced in August that she was expecting a second child.

At the time she and Amir were separated after a very public exchange of remarks over social media three weeks earlier. They subsequently reconciled shortly before Amir went to Australia to take part in the reality television show I’m A Celebrity… Get Me Out of Here.

Amir blamed his marital problems on lack of communication

One of the first to take to social media to congratulate the Khans on their new arrival was fellow contestant Jamie Lomas, who wrote: “Congratulations brother, sending the family my love.”

And Amir’s brother Haroon tweeted: “Welcome to the family.”

Fans rushed to congratulate the star on the birth of his second child.

While another commented: “Mashallah she’s gorgeous and congratulations”

“omg so cute,” said another.

And one told him: “Congratulations to you both”

The happy news came after Amir beat Phil Lo Greco in just 39 seconds at last weekend’s boxing match in Liverpool – and triumphantly roared out: “I’m back!”

The birth of the couple’s second daughter comes after a rough patch for them.