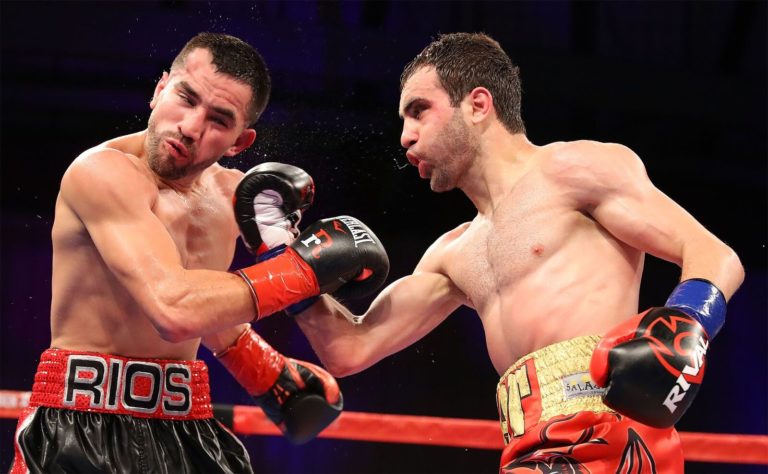 Friday night the Golden Boy on ESPN series hit “The Hanger” located inside of the Orange County Fairgrounds. Headlining the four card bout was the hometown hero and Santa Ana, California native Ronny Rios (29-3, 13 KO’s) as he went toe-to-toe with the always tough Azat Hovhannisyan (13-2, 11 KO’s) from Glendale, California for Hovhannisyan’s WBC Continental Americas Super Bantamweight Title.From the opening bell, both fighters shot out of their corners throwing quick solid punches with bad intentions with neither fighter taking a step backward. The solid back and forth action continued through the first two rounds. Then in the third round, the tide began to change as Hovhannisyan began beating Rios to the punch as he landed a solid combination hurting Rios for the first time in the bout. 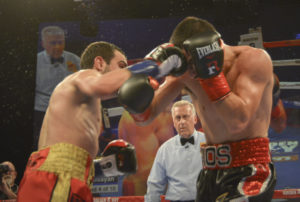 Hovhannisyan continued to punish Rios in the round landing a barrage of unanswered punches as Rios laid against the ropes. When the closing bell to the third round rang, Rios wobbled to the corner out on his feet. The fourth round wasn’t much better as an accidental headbutt raised a large hematoma on the right side of Rios’ forehead. Rios looked as if he turned the fight around in the fifth, but in the sixth tasted the canvas as Hovhannisyan landed a solid right cross.Rios beat the count, but never fully recovered from the beating he had received throughout the fight. Hovhannisyan continued landing an onslaught of punches forcing referee Jack Reiss to step in and call a halt to the bout of the 1:12 mark of the round.In the co-Main event, Rios’ younger brother and undefeated Golden Boy welterweight Alexis “Lex” Rocha (11-0, 8 KO’s) captured the WBC Continental Americas title as he took on Miguel Dumas (10-2, 7 KO’s) from Tijuana, Mexico. Rocha wasted no time in using vicious combinations to hurt Dumas. Rocha then caught Dumas with a big left uppercut flooring his opponent. Dumas beat the count but seconds later Rocha finished the show with a series of devastating blows to the head that completely knocked out Dumas. Referee Edward Hernandez stopped the fight at the 1:49 mark, with Dumas still out on the canvas.

In the television swing bout, local fan favorite “La Diva” Maricela Cornejo (9-2, 2 KO’s) looked to get one step closer to a world title as she entered the ring against Lisa Garland (15-9, 8 KO’s) from York, South Carolina. Cornejo came out early utilizing a stiff jab and great overall ring generalship to outclass and outbox Garland. Cornejo turned up the heat in the fourth round and began landing big right hands hurting Garland and forcing her to use the ropes to keep her up, that’s when referee Raul Caiz Jr. had seen enough and called a halt to the bout.