It appears that WBA super middleweight champion George Groves may not be able to participate in the WBSS super middleweight final. As we all know Groves suffered a dislocated left shoulder in his semi-final fight against Chris Eubank Jr which he had surgery to repair a few weeks after the fight.

Last month Groves gave the fans and media an update basically saying that he would be fit and ready for the final of the WBSS tournament against Callum Smith in July. 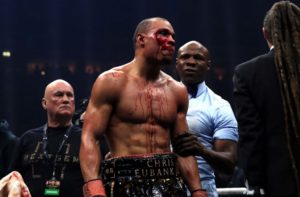 Apparently, that’s not the case.

Comosa AG chief officer Kalle Sauerland who is considering his options had this to say.

“You will find out about the finals in the next 10 days, but there is a possibility that we will have to bring in a replacement,”

“We’re working at the moment on all the solutions and scenarios, where George [Groves] is fit and where he isn’t.”

There are rumors floating around that the aforementioned Eubank Jr could replace Groves.

Sauerland admitted that is indeed a possibility saying this.

“Would I want to watch Callum Smith-Eubank Jr outside of the tournament? Absolutely. It’s a great fight. So having him in as a lucky loser would make sense,”

He did make it clear however that his preference is to have Groves in the finals saying this.

“We can push a month, but we can’t push it back by three or four months. We have a substitute system. We said that from day one, and that’s the situation. We’re still hoping it’s George Groves, of course we are.”

“We want Groves in the final, but if that’s not possible and he doesn’t declare himself fit in the next 10 days, we have to find a solution.”

From Sauerland’s comments, it seems like a decision will be made very soon.