Garcia (34-1, 20 KOs), a former unified champion at 140 pounds and the former WBC welterweight champion, lost the WBC title to Thurman by 12-round split decision in 2017. He bounced back with a knockout victory over former champion Brandon Rios in February. The WBC had made that fight a title elimination match, which put Garcia in line to fight Thurman again for the title.

Porter (28-2-1, 17 KOs), a former welterweight champion, lost a close 12-round decision to Thurman in 2016. He became the mandatory challenger for the WBC title when he knocked out Andre Berto last year. He maintained his status with a 12-round decision over Adrian Granados in November. 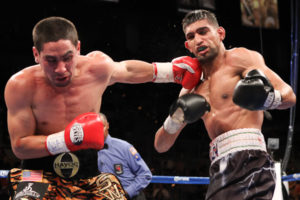 Thurman injured his neck in a car accident in February 2016, which delayed his match against Porter by three months. When they met Thurman defeated Porter by unanimous decision on June 25.

He defeated Garcia by split decision in a welterweight unification match on March 4, 2017. A month later he had major surgery on his right elbow to remove bone spurs and calcium deposits. He is still in rehabilitation from that surgery.

Thurman injured his hand hitting the heavy bag last month and aggravated the injury sparring with some amateurs at his gym in St. Petersburg, Florida. An MRI revealed bruises to the metacarpal bones in the hand, which also has extensive swelling. Thurman can’t have any impact with the hand for at least 8 weeks, which added another delay to his ring return.

He now hopes to return to the ring in the late summer or early fall.

As a result of Thurman’s decision, the WBC has ordered Shawn Porter and Danny Garcia to fight for the vacant belt. Thurman, who still holds the WBA’s super title, will have the option to get an immediate crack at the winner when he returns.