English Super-Middleweight Champion Darryll Williams will make the second defence of his title against undefeated Halesowen talent Lennox Clarke at The 02 on Saturday 14th April.Williams (16-0, 6 KO’s) seized the English 168lbs title from Jahmaine Smyle in a Fight of the Year contender at the Leicester Arena in April 2017.The all-out war went the South Londoner’s way on a split points decision after 10 tremendous rounds of gruelling, back-and-forth action that had fans on their feet throughout.‘Ferocious’ then inflicted another defeat on his bitter foe when the rivals rematched at London’s Copper Box Arena. All-action Williams won a majority decision against Smyle as the pair served up another belter of a contest.Now trained by David John in Swansea, Williams is aiming to dispatch Clarke in style on April 14th before targeting a shot at the British Super-Middleweight title later in the year. 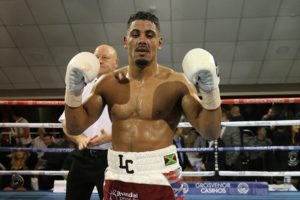 Fast-rising Midlands standout Clarke (16-0-1, 6 KO’s) has been waiting patiently for his shot at Williams’ title. The 26-year-old also holds a win over Smyle, having floored the Leicester man on the way to a ten round decision in December.

In an interview to Sun,Clarke said,”I’ve watched Clarke’s win over Smyle and all I took from it is that he beat an already defeated man. By the time Clarke fought Smyle, he was already a well defeated fighter mentally. He had two all-out wars with me and some tough fights before that.Up until he scored a knockdown in round nine I actually had Clarke losing the fight. Smyle was pressuring Clarke and pushing him back, if he can’t handle Smyle then what am I going to do to him?”.
Williams v Clarke lands on the undercard of Billy Joe Saunders’ WBO Middleweight World Title defence against domestic rival Martin Murray and Terry Flanagan’schallenge for the vacant WBO Super-Lightweight World Title against undefeated American Maurice Hooker.An unmissable card also features rising Light-Heavyweight star Anthony ‘The Beast’ Yarde and Heavyweight sensation ‘Dynamite’ Daniel Dubois while Hackney Super-Lightweight talent Ohara Davies makes his highly-anticipated comeback, with further exciting additions to the undercard to come.