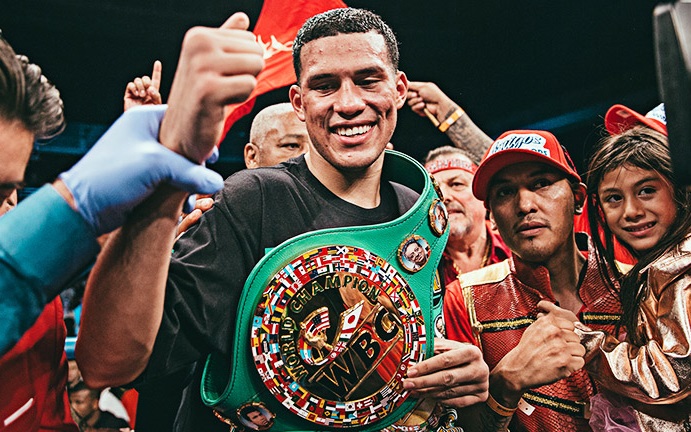 Last week it was reported that David Benavidez was scheduled to fight Matt Korobov in July on the undercard of Mikey Garcia vs Robert Easter Jr. But that looks unlikely as it is confirmed that David Benavidez has signed with Top Rank Promotions in what is considered a surprising move by many. Previously David Benavidez was promoted by Samson Lewokowicz and was advised by Al Haymon. By putting Benavidez on the Top Rank on ESPN platform will help build a possible unification between him and fellow champion Gilberto Ramirez.

Benavidez is a rising superstar and Arum clearly sees that and wants to grab him under his promotional banner and make him a star.

Arum acknowledged there are some legal issues that will need to be handled with Benavidez possibly being under a promotional contract with Sampson Boxing. Sampson Lewkowicz has stated to Boxing Scene that the 21-year-old signed a contract in November of last year that is good through 2021.

Arum said that any further questions could be handled through Top Rank attorneys Dan Petrocelli and David Marroso.

The WBC ordered negotiations to begin between Benavidez and their number two contender Anthony Dirrell. The teams have until June 22nd to reach an agreement or a purse bid will be ordered.