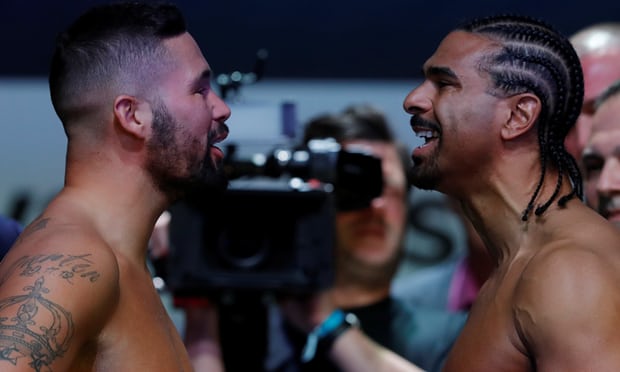 It’s a must-win showdown where everything is on the line; possibly their careers, their reputation and bragging rights. David Haye (28-3, 26 KO’s) and Tony Bellew (29-2-1, 19 KO’s) are both out to prove something to the fans and themselves. Bellew wants to prove his first victory against Haye wasn’t just a fluke and even without the injury to Haye, he still would have had his hand raised. Given the fact, Haye was injured and he couldn’t finish him with a decisive knockout punch has to lead many to question Bellew’s power and chances against a healthy Haye. It’s a fair point.

Haye has a lot of pressure on him as he tries to prove that the injury was the sole reason for the loss. Injuries are a common thing with Haye as his career has been marred by them. If he wants to continue to compete in the heavyweight division he’ll need to prove his body can endure as another loss could literally be the end for the former WBA heavyweight champion. 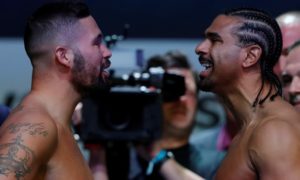 Whether Haye can fight injury-free or can Bellew pull off another upset remains to be seen. With both men never being short on words this is has been a great buildup for what is an intriguing rematch

Tony Bellew said David Haye will pay for every word in Grudge match, Bellew after the weigh-in said,” I want to cause havoc, I want to cause mayhem – and I mean the worst mayhem you can see. Something happens to me [in the ring]. I’m gonna flick a switch. I want to do damage. I swear when I get him on Saturday, he’s going to pay for every word. I’m going to smash him. And I’m not going to stop. He’s finished. He has no idea what’s coming.

“I know what I’m capable of. I’m a horrible fucker when I’ve got boxing gloves on. I’ve let sparring partners off the [hook] so many times in this camp. I’ve wobbled them, rocked them. Without being big-headed I could have rendered every single sparring partner unconscious if I chose to. I’ve been that sharp and that vicious. I’m telling you now, Saturday I will knock the shit out of this fella. I will take him out and it’s going to be horrible. That’s not nice. I just wish this fucking anger and rage would go, but it won’t.”

Haye looked his body-beautiful self at 15st 10lb, a stone lighter than 14 months ago. Bellew weighed just over 15st, three pounds lighter than in March 2017.

The bout will take place on Sky Sports Box Office and is being held in front of a sold-out crowd at the O2 Arena in London.