Undefeated welterweight champion Errol “The Truth” Spence Jr. will defend his IBF world title in a Dallas homecoming Saturday, June 16 live on SHOWTIME at Ford Center at The Star in Frisco against unbeaten mandatory challenger Carlos Ocampo in an event presented by Premier Boxing Champions. It will be the first boxing event inside Ford Center and Spence’s first hometown fight as world champion.

“I’m honored to be fighting in Dallas before my hometown fans and the people who have supported me from the beginning,” said Spence, who last competed in Dallas in 2015 with a knockout of Alejandro Barrera.

“This is something I’ve been wanting to do for a while now. It’s going to be great to fight at The Star, and because I’m a big Dallas Cowboys fan, I’m looking forward to fighting on the campus of Dallas Cowboys World Headquarters.” 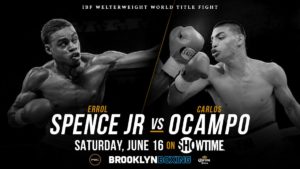 Spence, who will attempt to make the second defense of the world title he won last May from Kell Brook, combines explosive power with sublime boxing skill. In his last four fights, Spence has begun to assert himself as the best boxer in the deep and talented 147-pound weight division. Today, Spence is rated in the top-10 on boxing’s coveted pound-for-pound list. Ocampo, who had a highly rated amateur career in Mexico, is also undefeated but will be facing his toughest challenge to date as a professional in his first world title fight.

“I believe that I’m the number one fighter in the welterweight division and I’ll step into the ring on June 16 with that feeling. I’m going to draw from the energy of my fans. I’ve studied some of Ocampo and I can tell he likes to box but he’s willing to get into a fight. I know how he feels going into someone else’s hometown for his first shot at the title. This is his big opportunity and it’s going to make this a great event.”

The 22-year-old Ocampo (22-0, 13 KOs) will be taking a major step forward in his career with this mandatory title challenge against Spence. Ocampo, of Ensenada, Baja California, Mexico will be making his U.S. debut and fighting professionally outside of Mexico for the first time. Ocampo is a two-time silver medalist at the Mexican Olympiad, an amateur national championship tournament. His holds significant professional victories over former world title challengers Jorge Paez, Jr. and Charlie Navarro while he most recently scored a seventh-round stoppage of Dario Ferman in November.

“I’m training very hard for my fight against Errol Spence Jr.,” said Ocampo. “This is the opportunity that I’ve worked my whole life to get and I’m coming to take Spence’s belt on June 16. I will give the fans a very exciting fight and show once again what Mexican fighters are made of.”

Boxing: Keith Thurman return pushed back due to injury

Previous articleBellator: Dillon Danis feels a fight against Ben Askren would mean an easy submission for him
Next articleBoxing: Jerwin Ancajas and Khalif Yafai to defend their title on May 26