WBA super featherweight titlist Gervonta “Tank” Davis, could be appearing on DAZN. Eddie Hearn has stated he fully understands that Davis is not a free agent and under contract with Mayweather Promotions.

However, Hearn is willing to work with his promotional company and pay him to double what he’s currently making. 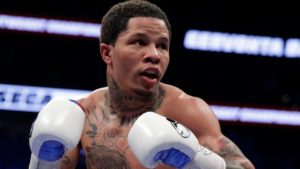 Hearn has been looking to acquire top talent to showcase on DAZN in the American market. Matchroom Boxing USA debut is set for September 2018. DAZN is a new streaming service trying to break into the America market as reported previously.

Working with other promotional companies to showcase their fighters could be a path to success for DAZN streaming service. Davis, who recently won the WBA title by defeating former WBA featherweight champion Jesus Cuellar in April, has expressed several times that he may be unhappy with his current situation at Mayweather Promotions via social media. This could be the change the young champion may need.