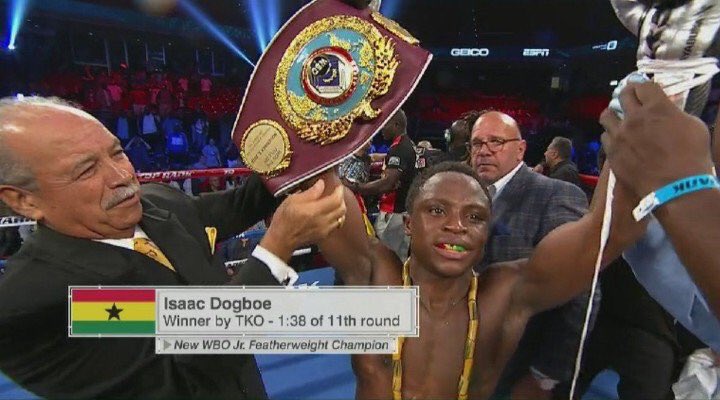 From the Liacouras Center, in Philadelphia, PA, in the main event, WBO Junior Featherweight Champion Jesse Magdaleno returned from a year-long layoff and was making the second defense of his title, against fellow unbeaten interim champion Issac Dogboe of Ghana. It didn’t take long for Magdaleno to shake off the rust in round one as he was able to drop Dogboe with a hard right hook.

The action in the second half of round two heated up with both guys landing hard shots. Dogboe landed some hard right hands that pushed the champion back to the ropes. Magdaleno responded well landing his own hard shots at times. 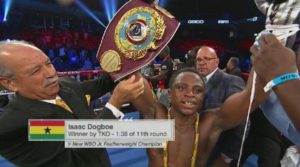 The fourth stanza lacked the action of the previous rounds but it was a better round for Dogboe who was able to land some hard shots on Magdaleno.

Round five was huge for Dogboe, who dropped the champion with a beautiful hard right hand. Dogboe completely dominated Magdaleno throughout round 5 unloading huge shots.

Rounds six through eight appeared to be all Dogboe, who continued to land hard shots to the body and head.

The ninth round was a Magdaleno round as he was able to slow down the pace and box Dogboe who’s activity dropped.

Rounds ten and eleven were all Dogboe who hurt Magdaleno in the 10th and dropped him twice in the 11th to win the WBO Jr Featherweight title.

In a brilliant performance Issac Dogboe moves his record to (19-0, 13KOs) while Magdaleno suffers his first career defeat.

The two fighters, who talked plenty leading up to the bout, especially Dogboe, embraced after the bout. This was good enough, in my view, for an eventual rematch — maybe not immediately, but I’d love to see these two again, because I think there’s a better, perhaps less rusty Magdaleno who could fight Dogboe and make it an even better fight.

As for Dogboe, it’s obviously a dream come true for the young fighter, and he jumps up into the very top of the ranks at 122 pounds with this win.