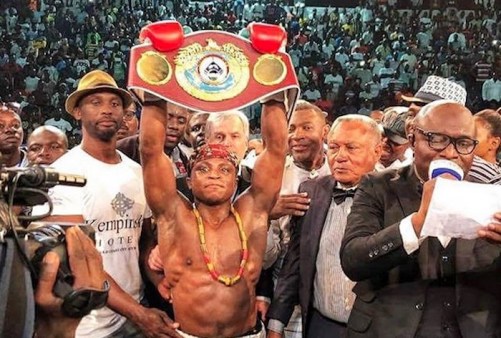 Ghana has the history of producing world champions in Boxing, especially Bukom, a small neighborhood in the Ghanaian capital, Accra, is busy, noisy and somehow special.There is something strange about Bukom. It’s a poor place, but nothing out of the ordinary in this part of the world. The people live crowded together and, in little shacks, under tin roofs, there are men, women, and children at work.

Azumah “The Professor” Nelson lived and trained in Bukom.The winner of three world titles in the 1980s and 90s, he became a national hero and he’s widely considered to be the greatest boxer ever to have come out of Africa.Having shared the ring with the great Mexican fighter Salvador Sanchez, Pernell Whittaker, He’s one of the most loved sportsmen in Ghana. In an interview to BBC, he said,” Bukom is like survival of the fittest,” he says. “When you are a child you need to find food for yourself, you need to struggle for yourself to get something to eat and get money. It makes you tough… Sometimes you just fight. Fighting is nothing, it’s not any big deal.”

Boxing is built into the culture of Bukom. If two men or boys are arguing in the street, people tell them: “Don’t argue. Stop talking. Just fight it out.There are posters on the walls of Boxing gyms in Bukom advertising upcoming bouts and others paying tribute to the local champions, another great champion to come out of Ghana is the great Joshua Clottey who has shared the ring with Manny Pacquiao, Diego Corrales, Antonio Margarito, Miguel Cotto, Jab Judah and Anthony Mundine.

And most latest fighter who’s following the footsteps of his predecessors and is chasing greatness is  Issac Dogboe.

The arrival of Isaac Dogboe is a story that’s proved heart, determination, faith, and family can overcome anything.It has been a long journey for Dogboe who fought in the 2012 Summer Olympics Games at the age of 17 while representing his native country of Ghana. Dogboe started his professional career in the United Kingdom shortly thereafter. The decision to move back to Ghana was caused by an unfortunate turn of events with the passing of his grandfather. Dogboe and his father Paul decided to turn this into a positive of non-stop motivation and doing it their way without a promoter.Then finally the opportunity of a lifetime arose when the WBO ordered Isaac Dogboe vs Ceasar Juarez for the interim title. Dogboe punctuated the fight with a 5th round knockout in his first big test. The fight took place in his home country of Ghana, in front of a packed crowd that celebrated with pride.Finally, the journey is coming full circle following the victory over Juarez as he is now set to fight Jessie Magdaleno for the WBO world title in Las Vegas at the Mandalay Bay Resort and Casino on April 14, 2018.

Both Magdaleno and Dogboe are undefeated and in their prime. The fight is sure to be a clash of styles in which something will have to give as both guys should be looking for a stoppage. If hairstyles could win fights then it’s Magdaleno all the way but it takes skill, will, and determination and that is where Isaac Dogboe thrives.

Previous articleBoxing: Regis Progrias brutally knocks out Julius Indongo in 2nd round (VIDEO)
Next articleUFC: Luke Rockhold and Michael Bisping take digs at each other