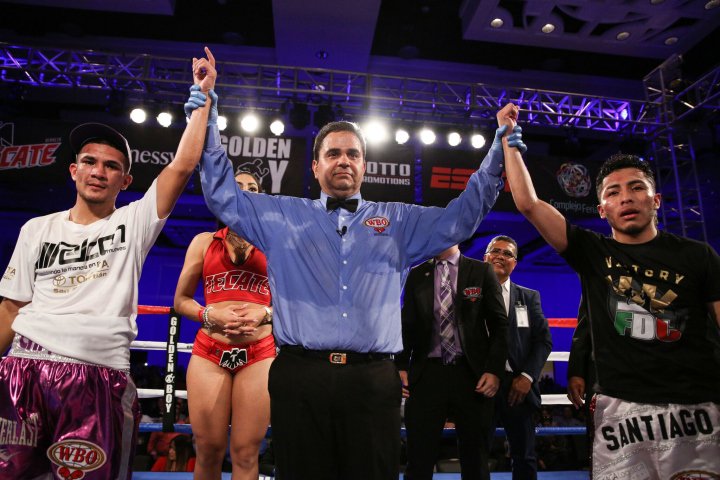 Two exciting battles ended in two controversial draws as Jesus “Chiquiro” Martinez (20-0-2, 13 KOs) and Alejandro “Peque” Santiago (16-2-4, 7 KOs) fought to a split draw in the main event of the March 24 edition of Golden Boy Boxing on ESPN at Complejo Ferial De Puerto Rico in Ponce.The fight was a rematch of their 2016 clash which ended in a majority draw. Martinez, who retained his NABO Super Flyweight Title, earned one score of 96-94. A second judge scored the fight 96-94 for Santiago, while a third scored the fight a 95-95 draw. 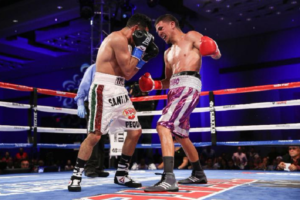 “I really think that I won this fight,” said Jose Martinez. “I was all over him [Santiago].

“There were some rounds he won, but I won the fight. It was a bit different this time because he was moving and boxing a bit more, but I was there to fight. It’s a draw and I respect the judges, but I will keep working hard and will see soon what my promoter has planned for me.”

“I got robbed again,” said Alejandro Santiago. “I am disappointed. I beat him in his own hometown. It’s really disappointing because I came twice to fight for this championship and both times there were draws. It’s unbelievable. I worked really hard just so that it could end in a draw.”

In a stunning upset, Argentine puncher Lucas Fernandez (12-1-1, 9 KOs) scored a come-from-behind technical knockout victory against previously undefeated 115-pound prospect Joshua “The Professor” Franco (13-1, 6 KOs) in the ninth round of a scheduled 10-round super flyweight battle.

Though Franco dropped him early with a beautiful uppercut in the first round, Fernandez eventually wore down the native of San Antonio, Texas, forcing the referee to end matters for Franco in the ninth round after several unanswered blows.

Rashidi “Speedy” Ellis (19-0, 13 KOs), the welterweight pride of Lynn, Mass., stopped Fidel Monterrosa (38-17-1, 30 KOs) of Barranquilla, Colombia via technical knockout in the fourth round of a scheduled eight-round welterweight bout.