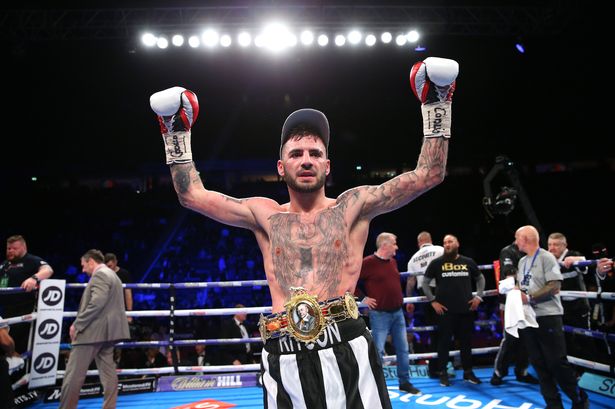 Ferocious Forest Hall puncher Lewis Ritson (now 15-0, 9 KOs) showed devastating power by stopping another British lightweight contender in Scott Cardle and retaining his coveted Lonsdale strap inside two rounds. The encounter got off to a ferocious pace with Cardle storming out trying to catch Ritson early with a barrage of punches. However, Ritson remained composed and managed to stun Cardle in the second and get him out of there, landing some heavy, crisp shots to the temple of the Scotsman. 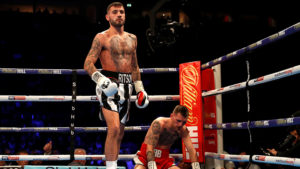 Cardle came into the fight with lots of confidence and felt he had reevaluated with trainer Joe Gallagher since losing the British title to Robbie Barrett and putting himself back into contention with some solid wins after that slip up, but it was the rising star from the North-East who prevailed and demonstrated why he is the man to beat in the division with stand out performances over Robbie Barrett and Joe Murray and now dismantling Cardle. The lightweight division has lit up with the emergence of Ritson and looks to be a threat to anyone in the division.
Weathering the storm and tightening his defence, Ritson came out in the second behind the jab and saw vulnerabilities in Cardle’s guard, whipping the right hand round the side and catching Cardle clean, backing him up against the ropes with brute force. Without the intervention of the corner and the compassion of Cardle’s corner, the result could have ended much worse with Ritson’s concussive punches taking their tole.
Ritson will be looking to carry this momentum of impressive performances into the rest of the year and with the Commonwealth title clash between Sean Dodd and Tommy Coyle yet to unfold, the 24-year old will be able to sit back with his eyes peeled on that fight and potentially target the winner later on in the year for another interesting domestic dust-up.
With the emergence of North East talent putting itself firmly on the map with the likes of Ritson and outstanding amateur Josh Kelly, whos fighting next weekend on the AJ-Parker undercard, some big nights are scheduled for the city. The work put in behind closed doors has certainly paid off for Ritson and now he’s been given the opportunity to showcase his skills on a massive card such as this one and exposure to build his profile.