Boxing: Jose Ramirez ‘The Pride of Central Valley’ to return in July

Jose Carlos Ramirez, the pride of Central Valley, California is all set to defend his WBC super lightweight title against Danny O’Connor in a homecoming bout on July 7th in Fresno. Ramirez was supposed to fight WBC interim junior welterweight champion Regis Prograis, but after two canceled purse bids between the two, and the news that Prograis is likely to participate in the WBSS 140 pound tournament, the champion is moving on. 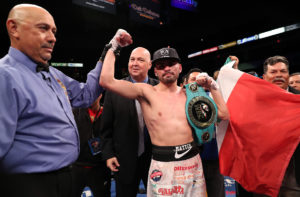 Jose Ramirez won the WBC world Super lightweight title last March when he outpointed Don King Boxer Amir Iman over twelve rounds via unanimous decision. Bob Arum has dubbed Jose Ramirez as the next star but Ramirez still has more to do to really become a star. He’s going to have a tough time not being a fan favorite either way. He’s shown real improvement over the last few years, and dramatic technical improvement in his last half dozen fights. Since his emergence at the 2012 London Olympics, Ramirez has proven himself to be an extraordinary fighter, both in and out of the ring.

For Fresno residents, Jose Carlos Ramirez is a star who has been fighting for the Water rights for the Central Valley residents. For years, Ramirez also has been a big puncher on political issues. Before immigration, he championed water rights. He was inspired by how his father, Carlos, and thousands of California farm workers suffered through California’s historic drought.

His goal is to keep water coming to the region so it can continue to produce fruits, vegetables and nuts. To accomplish it, he teamed up with the California Latino Water Coalition to raise awareness about water issues and how they affect workers and businesses.

It’s safe to say Bob Arum has done a solid job of marketing him and it will be interesting to see how far he goes in near future.

Boxing: Felix Verdejo – The Poster boy of Puerto Rican boxing is back