Last night David Haye’s promotional company Haymaker Ringstar put on a night of Boxing that was headlined by Heavyweight prospect Joe Joyce.The action was screened on free to air television in the UK as Haye looks to continue to build upon his promotional career for after he retires from boxing.But Haye not retired just yet of course.

Joyce dropped the 6’10” Palmer with a hard right hand to the head. Palmer then got wearily back to his feet, and the fight was promptly stopped by the referee. It wasn’t much of a fight. It looked more like a demolition job to me. 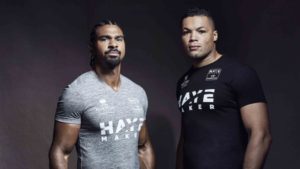 In the early moments of the fight, the 6’6” Joyce jabbed the slow and out of shape looking Palmer. Joyce moved around while throwing a slow jab. When he saw there was nothing coming back from Palmer, Joyce threw a left-right combination that dropped him hard on his backside. That was it. Palmer got up and the referee waived off the fight. The left hand that Joyce threw missed, but the right that followed it landed flush on the side of Palmer’s head, sending him down on the canvas.

Haye has an upcoming rematch with Liverpool’s Tony Bellew that will be shown on US television on May 5th from the 02 Arena in London.

It will see the two duel once more after Bellew’s chock stoppage win first time around last year.

The pre-fight verbal jousts are flying already and last night as Haye was commenting on his fighter’s card, Bellew had this message for him:

I tuned in to see Joe Joyce and I’m having to listen to @mrdavidhaye do exactly what he accused @EddieHearn of doing! I’m trying to watch Joe David I don’t wanna know about your plans #ApplesAndPears #Embarrassing

The above reference from Bellew goes back to last year before their first fight when Haye accused Bellew’s promoter Eddie Hearn of being too much of an egotistical loudmouth who promotes himself instead of the boxers.

Hearn had the last laugh with Bellew winning last time out.

Time will tell what happens in the rematch.

Previous articleUFC: Fabricio Werdum posts a message on Instagram after Volkov loss
Next articleBoxing: Anthony Joshua fires back at critics