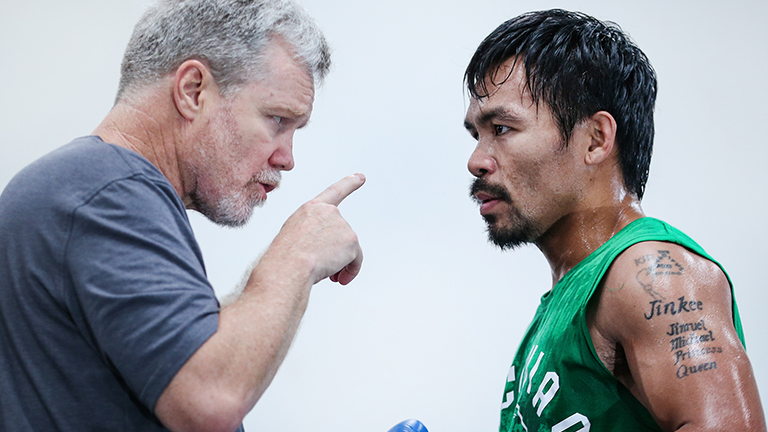 The move has been suspected for some time after Pacquiao’s press release announcing his upcoming fight with Lucas Matthysse didn’t include Roach’s name.Pacquiao will be trained by best friend Restituto ‘Buboy’ Fernandez and Raides ‘Nonoy’ Neri. In an interview with ESPN Boxing Writer Dan Rafael, Pacquiao’s adviser, Michael Koncz explained that the split was caused by issues stemming from Pacquiao’s previous fight – a 12-round decision loss to Jeff Horn in Brisbane. 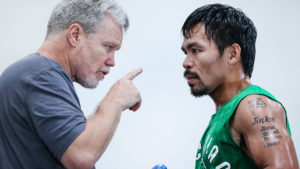 “There was some concerns Manny had in the last fight and some statements Freddie made to the media that Manny wasn’t very pleased about.” Koncz said.

“That’s Manny’s decision. Manny has told me Buboy will be handling the training on this fight,” Koncz added. “What’s important to Manny is that he has one voice to listen to in the corner that he trusts, and I guess that’s Buboy for this fight.”

As it turns out, Roach did not hear about the split first-hand.

Roach said he wished Pacquiao well for the future but admitted he had been “hurt” after learning of the Filipino’s decision to axe him indirectly.

“Manny and I had a great run for 15 years – longer than most marriages and certainly a rarity for boxing,” Roach said. “I wouldn’t trade any of it. Inside the boxing ring and the political ring, I wish Manny nothing but the best.

“I would be lying if I didn’t say I wasn’t hurt that he didn’t contact me personally about his decision, but the great times we enjoyed together far outweigh that.”

Roach was an ever-present in Pacquiao’s corner during his rise to the pinnacle of his sport, helping mould the fighter into one of the best boxers in history.

Pacquiao is to fight Matthyse for the Argentine’s WBA welterweight belt in Kuala Lumpur on July 15.

Pacquiao has not fought in the ring since being defeated on points by Australia’s Jeff Horn in Brisbane in July, a loss that cost the Filipino star his WBO crown.

Matthysse, who has 39 wins including 36 by knockout against four defeats, won the vacant WBA belt after beating Thailand’s Teerachai Sithmorseng in January.