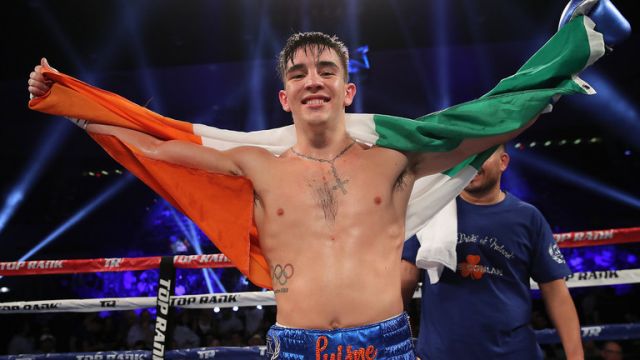 Anthony Joshua ultimately added another belt to his impressive collection last night with a points win over previous WBO champion Joseph Parker.He now is just short the WBC heavyweight belt to have all recognized titles under his control.Joshua has managed to do all this within just twenty-one professional fights following a relatively short amateur career – too. 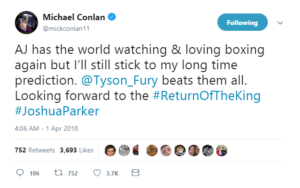 Michael Conlan will return to Madison Square Garden next month after it was confirmed he will fight on another massive undercard.

The West Belfast featherweight will be in familiar territory when he appears on the Jorge Linares v Vasyl Lomachenko bill on May 12.

Conlan (6-0-KO5) stepped up in class against David Berna at the same venue on St Patrick’s Day and earned a ruthless second-round stoppage.

And now he wants to take on an unbeaten rival in his seventh pro outing.

In his last fight’s post fight interview he said,”

Hopefully, we’ll be able to get a fight with someone undefeated because I want to step up again and show what I can do.

“It felt great to be in there against Berna. The fans turned out and the atmosphere was simply amazing. I wish the fight had gone on longer but that’s the way it goes sometimes.

“My trainer Adam Booth has brought back what I’m good at, which is using my boxing skills to break opponents down rather than steam in there and try to take them out quickly.

“It was a two-day party afterward. I had a great time but then it was straight back in the gym and preparing for the next one. There are talks about fighting in Belfast in the summer and this fight will set that up.”

Conlan joined the rest of the boxing world in championing the match-up between Linares and Lomachenko – two of the sport’s most fluent movers.

Fury is still to confirm a date, venue, and opponent for his comeback fight. As well as officially announce his new promoter.

The latter, however, is thought to be pretty much tied up behind the scenes with an announcement forthcoming in the coming weeks.

Fury is still quite a bit away just yet from any of the world champions, as realistically, he’ll need a couple of warm of fights at least before going back in at that kind of level.

2019 is probably a more sensible time frame for Fury to be stepping in the ring with the likes of a Joshua or a Wilder.