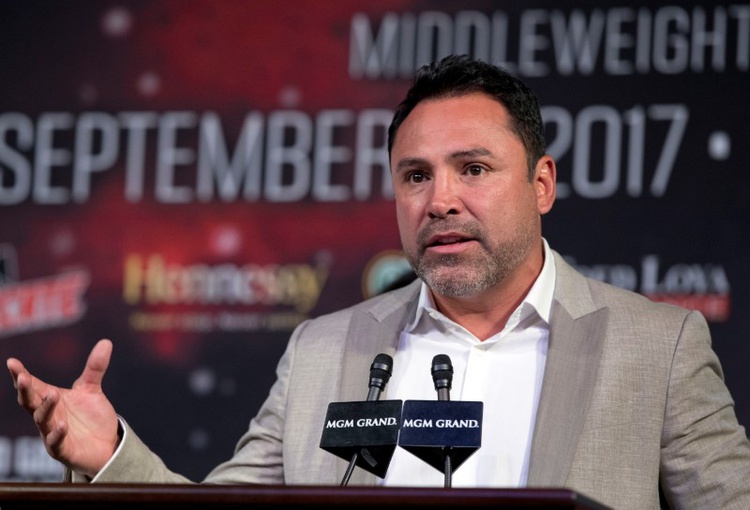 While Canelo Alvarez is looking bad out here — getting flogged in the court of public opinion over his failed drug tests and subsequent withdrawal from his rematch with Gennady Golovkin — his Golden Boy promoter is arguably looking worse by panhandling the streets of Twitter. The former six-weight world champion and CEO of Golden Boy Promotions Oscar De La Hoya took to social media this morning, campaigning for the heavyweight rivals to join his stable in order to achieve their true potential in the US. 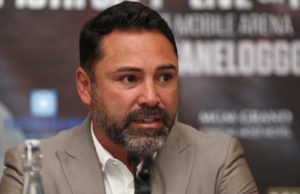 “If @anthonyfjoshua and @BronzeBomber want to become household names in the US of A and stop doing mediocre ratings on Showtime, call me and I’ll make you superstars in the beautiful USA. #GoldenBoyPromotions,” Oscar tweeted.

De La Hoya spent more than an hour replying to fans, suggesting while Joshua’s recent achievements are impressive, he still has some way to go before cracking the US market.

“I guess he’s fine making £15 million when he can make £40,” he told one user, calling AJ “irrelevant” in America.
“To be honest, the @anthonyfjoshua fight did 400k homes on cable and @BronzeBomber has done over 1.2 million.“I’m saying he’s not making huge money! He’s a champion, I respect it. But he’s no @MikeTyson, that’s for sure.

“I’m a fighter who loves boxing and breathes boxing all my life, I want @anthonyfjoshua to be considered a legend one day and make the most money doing it!

“If I was promoting @BronzeBomber I would take him to the UK and fight him with @anthonyfjoshua then have a rematch in the US. #idiots

And on Deontay Wilder, the 45-year-old said: “I made him champ and look at him now ever since he left.

It comes after Joshua’s current promoter, Eddie Hearn, suggested negotiations with Wilder would resume later this week after his meeting with AJ today.