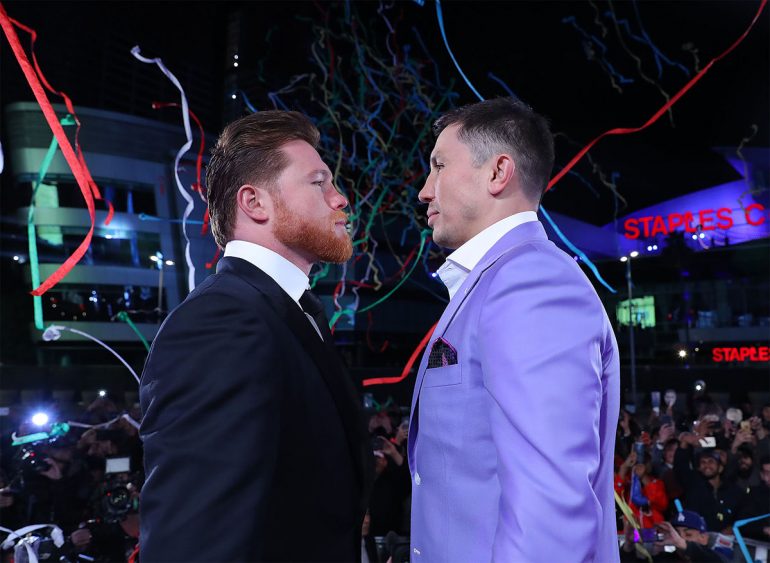 Saul ‘Canelo’ Alvarez is set to make his ring return on September 15, and everyone wants to see the long-awaited championship fight between Canelo and GGG and the fight looked likely since both GGG and Canelo signed up for VADA testing.  But RingTV is reporting that Golden Boy Promotions CEO Oscar De La Hoya told THE RING on Thursday he’s moving on from talks for a rematch between Canelo and GGG and instead pursuing other options for Alvarez’s fight on September 15 in Las Vegas.

According to RingTV, Oscar said, ” It’s clear to us that Golovkin doesn’t want to fight Canelo, It’s clear to us that after all the demands that they made, after Canelo having to do the hair follicle test, having to enroll in VADA, having to be tested by the Nevada State Athletic Commission randomly even before he was enrolled in VADA, it’s clear that GGG is afraid, So we’re going to move on and I’m going to start making phone calls to (Daniel Jacobs’) people, to (Billy Joe) Saunders’ people, start making calls to (Jermall) Charlo and (Spike) O’Sullivan.”

Oscar said that he was told by Tom Loeffler that ” GGG doesn’t want to fight. That’s all Tom said. They’re not going have a better deal than what they have now.”

De La Hoya is willing to go ahead with the rematch under the terms agreed to for May 5, but the hall of fame fighter insists he’s not changing the deal.

There are numerous options for Canelo regarding his opponent, he could either fight Daniel Jacobs, Billy Joe Saunders or Jermall Charlo.

Jermall Charlo is advised by Al Haymon and doesn’t have a promoter, so that makes him a strong candidate for Canelo’s return on September.

Jacobs, on the other hand, has one more fight left under his HBO contract and the perception is that will be the final bout for him on the network. His promoter is moving Matchroom Boxing USA to the streaming DAZN with the first card slated to be in September.

Saunders as of late has shown a willingness to want a bout with either Golovkin or Alvarez, a fight with Golovkin would more than likely take place in England. Saunders could have the chance to become undisputed champion should he choose to go that route, while a fight with Canelo would certainly take place in America.