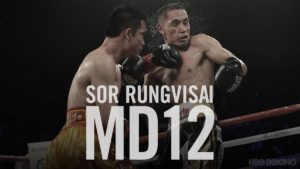 This past Saturday Srisaket Sor Rungvisai edged Juan Francisco Estrada on Judges scorecard (114-114, 115-113, and 117-111) to successfully defend his WBC Super Flyweight title for the second consecutive time on HBO in the event billed as ‘Superfly 2’.At the beginning rounds, the fight was looking pretty entertaining with Estrada showing some pretty sharp counter punching skills, speed and elite footwork which reminded many of Juan Manuel Marquez.Srisaket Sor Rungvisai had the clear edge early, but a manic charge from Estrada over the last four rounds left things in doubt and made it a very close fight. In the end, Sor Rungvisai got the edge from two of the judges Cathy Leona

The fight lived up to the expectations of many and WBC has ordered a rematch.

However, this fight saw Srisaket Sor Rungvisai climbing up the P4P rankings with Ring Magazine putting him on No.7, Sor Rungvisai in his last 3 bouts within a span of 1 year has fought 2 guys who were the best in the division with Roman “Chocolatito” Gonzalez being P4P no.1 when he faced SSR.

This mentality that SSR has is rarely seen in Boxing today when the best don’t fight the best and let the fight talks marinate for bigger financial gains.

Just a little over a year ago when it was announced that the P4P king Roman Gonzalez was going to fight an unknown guy named Sor Rungvisai from Thailand, it was expected by everybody that Chocolatito would very easily win this fight and he was also a massive favourite for their March 17 bout which was supposed to take place on GGG vs Daniel Jacobs undercard, but what followed on March 17th was perhaps the biggest upset in the boxing history in recent memory.

Even going into the rematch Chocolatito was  -400 favorite(meaning you’d have to wager $400 in order to win $100), while Rungvisai is $300 (meaning you’d win $300 if you bet $100), but the rematch turned out to be nightmare for Chocolatito as he was brutally knocked out by SSR in the fourth round and was ESPN Knockout of the year for 2017.

This fight also saw SSR earning him his then-career-high payday of$170,000 and an HBO main event slot.

This fight made Sor Rungvisai an even bigger star in Thailand and earned him a second audience with the Prime Minister.

“I was extremely proud and honored,” Sor Rungvisai said through Nakornluang Promotions’ Bank Pisitwuttinan to ESPN. “It was an honor for me and my family and I am very happy that I could do my part in building a good reputation for Thailand. I’m really proud that I can be an inspiration for the Thai people, especially the Thai youth, and Thai boxers.”

Sor Rungvisai comes from a very humble beginning, his rise from harsh poverty which saw his eating food out of the trash to becoming a world champion in Boxing’s lowest weight class is eminiscent of the incredible rise of Manny Pacquiao.

At 31 years old and has beaten two top boxers in the division and in which he was the underdog, only sky is the limit to what SSR can achieve in near future.

SSR lost his first two fights via knockout and the third fight ended up a draw.After his first two back to back losses he wanted to quit boxing, but he was forced with two choices either to become a boxer or go back to working as a trash collector.

In a interview to ESPN he said, “Before that fight, I was thinking that if I lost again I would not fight again because I was asking myself, ‘Should I keep on fighting when I cannot even win?’ But then it ended up in a draw, so I decided to keep on fighting”

His goals were modest. He aspired to win any sort of regional title and maybe get on television. If he could, he said he would be happy with his career.

But faith had planned something much bigger for Sor Rungvisai, with his sheer determination and hardship he wound up doing so much more. He’s won two world titles, beaten a legend in Gonzalez, his fights are must-see TV in Thailand and he’s an inspiration to his people.

Considering the lowest times that forced him to eat from the garbage to the heights he has reached, Sor Rungvisai has a hard time believing it happened. “I never thought that I would come this far,” he said. “Or even get to be a world champion.”