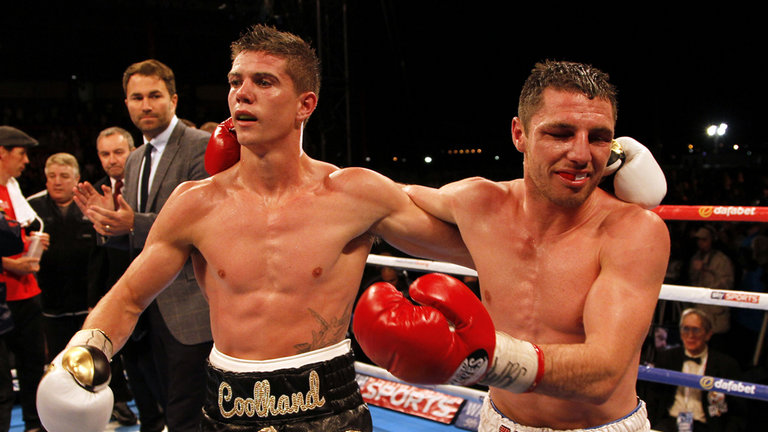 It started off as a cagey affair, with Birkenhead’s Sean ‘Masher’ Dodd looking to establish himself and work out Coyle early doors. However, the Hull man managed to get behind his jab, find his range, come forward on the front foot and applied relentless pressure, backing the champion onto the ropes at times. In particular, a chopping overhand right from Coyle upset the popular hometown fighter who looked unsteady in the final few seconds of the 2nd round.

The dimension of the fight changed in the fourth when Coyle flicked the switch and started to land a flurry of brutal punches which again sent Dodd back onto the ropes and was now a case of survival in the closing stages of the fourth stanza. The end was almost in sight for Coyle, and he began chopping Dodd down, mixing it up to head and body with little coming back. Dodd showed defiance and bravery to withstand the heavy barrage of blows and despite getting back to his feet after another rippling right hand, referee Bob Williams intervened and waved it off after the towel had been thrown in by Dodd’s cornermen. 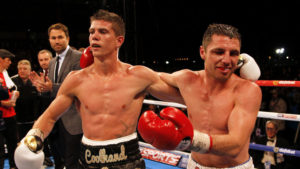 Nonetheless, this was tipped by many as the fan-friendly fight and lived up to its expectation inside the electric Echo Arena in Liverpool. Both men had shown the utmost respect in the build-up and embraced after an explosive encounter, where they put everything on the line. Coyle came with the ambition of achieving his lifetime dream and insisted it wouldn’t be a shock to anyone if he were to come away with the victory.

Falling short in his pursuit for the Commonwealth title back in 2013, losing to Liverpudlian Derry Mathews and again beaten for the British title by Tyrone Nurse three years later, Coyle certainly deserved another chance to right those wrongs and win the coveted Commonwealth strap.

The lightweight division has really come to life in recent months with undefeated British champion Lewis Ritson (15-0, 9KOs) set to defend his belt outright on June 16 in Newcastle against a tough customer in Paul Hyland Jr (18-0, 7KOs), before moving onto European honours later in the year one would think. Whether Coyle is prepared to challenge Ritson sometime down the line remains to be seen but pleasing to see him take back the Commonwealth title to Yorkshire.

Previous articleUFC: Jon Jones sides with Daniel Cormier on Twitter to further roast Alexander Gustafsson
Next articleWWE: Roman Reigns reveals who he wants to have a match with at WrestleMania