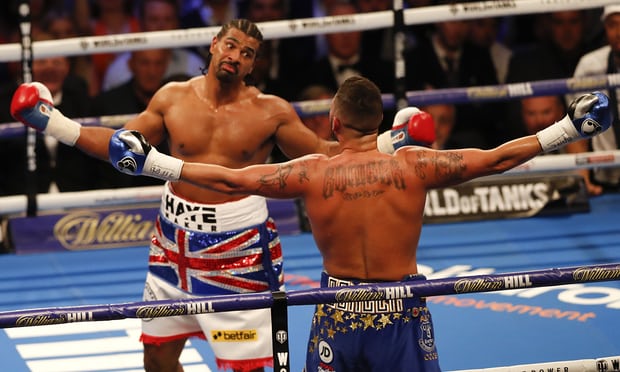 Tony Bellew  (30-2, 20 KOs) beats David Haye (28-4, 26 KOs) who went down three times before he was stopped in the fifth round. Haye appeared to be struggling with a right ankle injury, the latest problem to afflict the 37-year-old boxer who said he would retire if he didn’t beat Bellew comfortably.

In the first meeting, which took place at the O2 Arena in March 2017, Bellew moved up from the cruiserweight division to pull off a major upset with a stoppage win in eleven rounds. Haye was doing well in the cotest, until he suffered a severe ruptured Achilles in the contest and became a one-legged fighter. Once the injury was sustained, Bellew took over the entire fight and eventually forced Haye’s then trainer, Shane McGuigan, to throw in the towel. 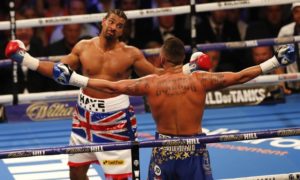 The rematch was initially scheduled for last December, but Haye suffered a biceps injury in training and withdrew. To prepare for the rematch, he parted ways with McGuigan and hired veteran Cuban trainer Ismael Salas.

The big finish came after Bellew dropped Haye late in the third round with a big right hand. Haye made it to his feet, but was knocked down again thanks to another big right hook from Bellew. He looked incredibly wobbly when he again regained his feet, but was saved by the bell at the end of the round.

Bellew shook his head throughout the fourth round as he landed a multitude of power punches to the head of Haye, but Haye somehow kept his feet despite looking very wobbly on his legs.

Both fighters traded big punches during a frenetic opening round. The second round saw more showboating and taunting than decisive action from either fighter, with Haye the instigator in that regard.

A sad end for David Haye, but brilliant from Tony Bellew once again. The last few years of his career have just been unfathomable.