Thai boxer Wanheng Menayothin clinched his 50th straight victory on Wednesday, defending his WBC title against a Panamanian challenger Leroy Estrada and tying the undefeated record of boxing great Floyd Mayweather Jr. The 32-year-old Thai nicknamed the “dwarf giant” reached the milestone in the fifth round of the minimumweight championship bout against Leroy Estrada in the northeastern Thai city of Nakhon Ratchasima. Wanheng’s quest to equal “Money” Mayweather has drawn interest between the unheralded, soft-spoken Thai and the brash and vastly more wealthy American. 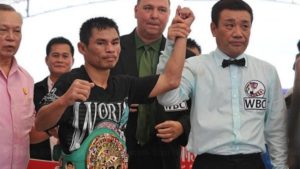 The Thai champion was landing the bigger punches from the start of the contest. In the third round, Menayothin dropped Estrada. And then a moment later he dropped him for a second time in the round. Once Estrada got, up Menayothin was battering him with punches and nearly stopped him. Estrada showed guts in trying to fight off the attack.

In the fourth round, Menayothin dropped Estrada very hard for the third time in the fight. And then a barrage of punches sent Estrada down for a fourth time at the bell, which likely saved him from a knockout loss at that point – although the end was near.

Menayothin continued to punish him in the fifth round, scoring a fifth knockdown – and referee Jay Nady had seen enough and waved off the fight to save Estrada from any further punishment.

Estrada, who was riding a four-fight win streak, was coming off a win over former world champion Saul Juarez from last May.

Previous articlePhotos: The Jamie Moyle Story
Next articleVitaly Bigdash vs Leandro Ataides looks to steel the show at ONE: GRIT AND GLORY