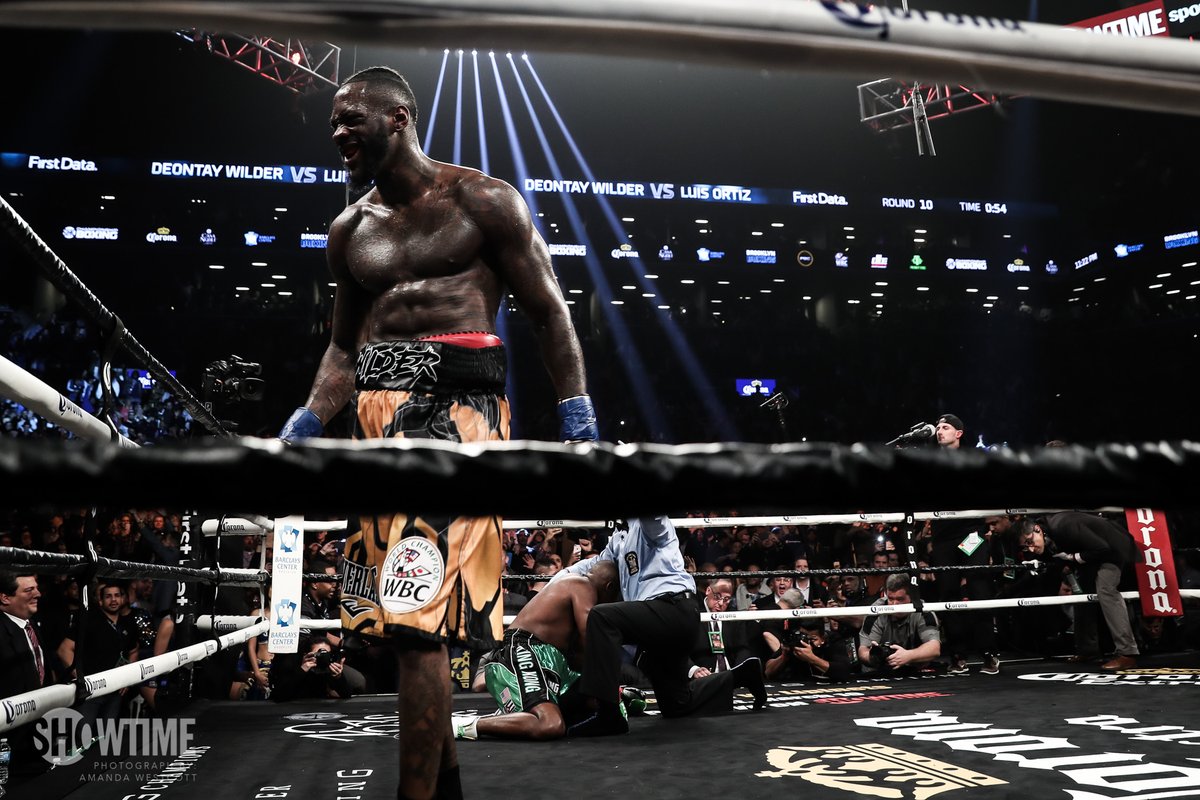 WBC heavyweight champion Deontay ‘Bronze Bomber’ Wilder (40-0, 39 KOs) had to overcome a lot of adversity to defeat previously unbeaten Luis ‘King Kong’ Ortiz (28-1, 24 KOs) after knocking him out in the 10th round on Saturday night at the Barclays Center in Brooklyn, New York.

Wilder hurt Ortiz with a big right hand at the end of the 9th. Wilder then unloaded on the tired 39-year-old Ortiz in the 10th round in dropping him twice in the round before the match was halted by David Fields. The official time of the stoppage was at 2:05 of round 10.Ortiz was knocked down once in round 5 and twice more in round 10 by Wilder. At the time of the time of the stoppage, Wilder was ahead on all three of the judges’ scorecards by 1 point. 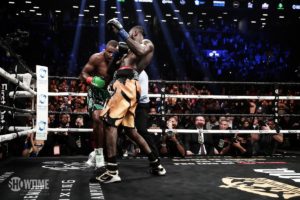 Wilder was hurt badly in round 7 by a big left hand from Ortiz. Wilder was then trapped on the ropes and took a storm of head and body shots from the Cuban Ortiz. It looked at one time that the referee David Fields was close to stopping the fight.After expending a great deal of energy trying to knock Wilder out in the 7th, Ortiz looked like gassed out badly. In the 8th round, Ortiz plodded around the ring dominating the action against a still badly hurt and tired Wilder. Ortiz tried bouncing around to bluff Wilder into thinking he wasn’t tired, but it was clear that he was very exhausted.

In the 9th round, Wilder caught Ortiz with a big right hand in the final seconds of the round that had him hurt. The round ended before Wilder could finish Ortiz. It was clear that Ortiz was not going to be able to recover in between rounds.

At the start of round 10, Wilder hurt Ortiz with a big right hand that staggered him badly. Wilder then nailed Ortiz with follow up right hand to the head that put Ortiz down. It took Ortiz a long time to get back to his feet. Just the effort alone for Ortiz to get back up seemed to drain him. After Ortiz got back up, Wilder teed off on him with a flurry of wind-milling shots to the head. Many of the slapping punches missed their mark, but Wilder eventually knocked Ortiz with a right hand. The referee stopped the fight, as Ortiz was badly hurt.It was not an impressive performance from the 32-year-old Wilder. He looked weak and timid most of the fight. The boxing fans booed loudly the lack of action, as there was little coming from Wilder. Boxing News 24 gave Ortiz the first 4 rounds by default because he was the only one throwing punches.