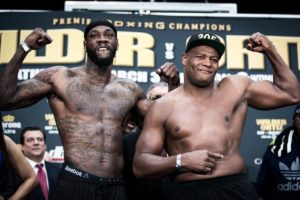 The month of March is here and with that people’s attention moves to the premier division of the boxing which is the heavyweight division which gets’s the attention of people across the world.The beginning of this month we will see Deontay Wilder defending his WBC Heavyweight title against the Boogeyman of the division i.e Luis ‘Kingkong’ Ortiz on 3rd March in Barclays Arena, New York.Then at the end of this month on 31st March, we will see Anthony Joshua, who is the biggest star in boxing right now unify his WBA and IBF with Joseph Parker’s WBO title infront of 75,000 people in Principality Stadium, Cardiff, UK.Our first stop takes us to  New York, The Barclays Center in Brooklyn to be precise. WBC World Heavyweight Champion, Deontay Wilder squares off against his toughest test in Cuban Luis Ortiz in a fight that has had more than its fair share of obstacles. Let us not forget that this fight should have happened six months ago, but a failed drug test from the challenger firmly hit the breaks on this fight. But only temporarily.

Now as a boxing fan I would almost always say that a fighter who is fundamentally stronger and is smarter in the ring wins a fight against a puncher nine times out of ten. Well, ladies and gentleman, this is no ordinary puncher. This is Deontay Wilder, and it is my personal opinion he is the biggest puncher in the world of boxing, and on the face of it it’s hard to disagree. Make no mistake about it I could sit here all day and talk about how his level of competition isn’t great, and he hasn’t really beaten anybody. Unfortunately, he is a champion of the weakest heavyweight division in recent memory. BUT, you can only beat what is put in front of you. There isn’t anything pretty about the way he has done it, but he has done it with raw power and left a path of destruction in his wake. 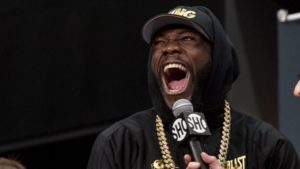 In Luis Ortiz he faces a man who’s skills far outweigh his own. In fact, Ortiz is better than Wilder in pretty much every department, fundamentally. Father time is not on the challenger’s side and there are already the naysayers beginning to flap their gums that should Wilder win, he has beaten an old man. But Ortiz is no joke, and I really wouldn’t be surprised if we saw his hand raised at the end of the night.

There are all but two caveats to this fight which really matter. Power and Chin. It goes against everything I know but in this fight boxing goes out of the window to a degree. We have seen Wilder get out boxed by several of his opponents, but look how they ended. Both men staring at the sky on the verge of an outer body experience. Wilder’s power is the great equaliser and he WILL land a shot at some point, if Ortiz’ whiskers cant take it, he will be added to the Wilder knockout list. The same can be said for the champion, who we saw rocked by Carlos Molina. It is paramount that Ortiz sets traps for Wilder if he is to win. Force Wilder to step in behind his jab by feinting and stepping back, creating opportunities to counter.Make no mistake fight fans, this is a real 50/50 fight. If you can only cast your eyes on one fight tomorrow, make it this one. Because this fight has Knockouts written all over it.