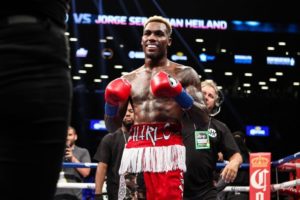 Former IBF middleweight champion Daniel Jacobs and unbeaten Jermall Charlo got into a heat confrontation last Saturday night while attending the fight between WBC heavyweight champion Deontay Wilder and Luis Ortiz at the Barclays Center in Brooklyn, New York.Jacobs, 31, looked more confident in the confrontation than Charlo, but that doesn’t mean anything. Jacobs was more confident looking than Gennady ‘GGG’ Golovkin and Dmitry Pirog, and he still lost to both of them. Jacobs still won’t acknowledge that Golovkin beat him, and he’s been saying ever since that he wants a rematch. It might not ever happen though. Golovkin is on another level in terms of the money he’s making right now.

Jacobs (33-2, 29 KOs) confronted Charlo to talk to him about some comments he’d made about him ducking a fight against him. Jacobs asked Charlo if he’s willing to come to HBO and fight him on that network. Charlo fights on Showtime. Charlo then said he’s willing to fight Jacobs on HBO. Charlo suggested that the two of them skip their next fights and face each other instead. Jacobs is scheduled to fight next month against unbeaten Maciej Sulecki (26-0, 10 KOs) on April 28 on HBO Boxing at the Barclays Center. Charlo, 27 will be fighting on April 21 against Hugo Centeno Jr. (26-1, 14 KOs) for the interim World Boxing Council middleweight title at a still to be determined venue on Showtime.Charlo would be a very dangerous fight for Jacobs. That’s a fight that could ruin Jacobs’ dreams of maybe getting a rematch with Golovkin. That’s the only thing that Jacobs is holding out for. Canelo Alvarez isn’t going to fight him. Golovkin can make more money fighting Canelo a second time and going after WBO middleweight champion Billy Joe Saunders. Jacobs might not realize it yet, but he has to fight Charlo and he also needs to fight Sergiy Derevyanchenko, because those are going to be his man competition after GGG moves up to 168 in the near future. If Jacobs is going to stay at 160, he’ll have to fight Charlo sooner or later whether his promoter wants him to or not.