The former undisputed flyweight champion of the UFC, Brandon Moreno has previously made history by being the organization’s first champion who was born in Mexico. As part of the co-main event of UFC 283 in Rio de Janeiro, Brazil, on Saturday night, Moreno (20-6-2 MMA, 8-3-2 UFC) will face champion Deiveson Figueiredo (21-2-1 MMA, 10-2-1 UFC) in a title unification fight.

The first quadriology in UFC history will take place when Moreno and Figueiredo square off for the fourth time.

But it goes further than that. Brandon Moreno fervently believes that his series with Figueiredo still ranks as the greatest flyweight rivalry in history. 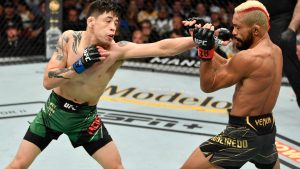 “As far as rivalry, yeah (this is the biggest) by a lot,” Moreno said. “What other one could get close? Demetrious vs. Henry (Cejudo)? Demetrious vs. (Joseph) Benavidez? I think speaking of history, rivalry, the bad blood, I think Deiveson and I, we have by far the biggest rivalry of the division.”

Beyond rivalries and feuds, “The Assassin Baby” also thinks his fourth fight in the weight class will be significant.

Although Brandon Moreno won’t rank this unification battle as the most significant in flyweight history, he is aware that there have been other crucial times in the category.

“I think what we’re doing right now Deiveson and I, it’s really big, it’s huge. And it’s opening the door for other contenders to keep developing. … I think what Deiveson and I are doing is the best thing that could happen to the flyweight division.”

Previous article
Joe Rogan ‘BUMMED’ by Francis Ngannou leaving the UFC
Next article
Jon Jones Says He Has “Nothing But Respect” For Daniel Cormier: I Love What He’s Done In His Life