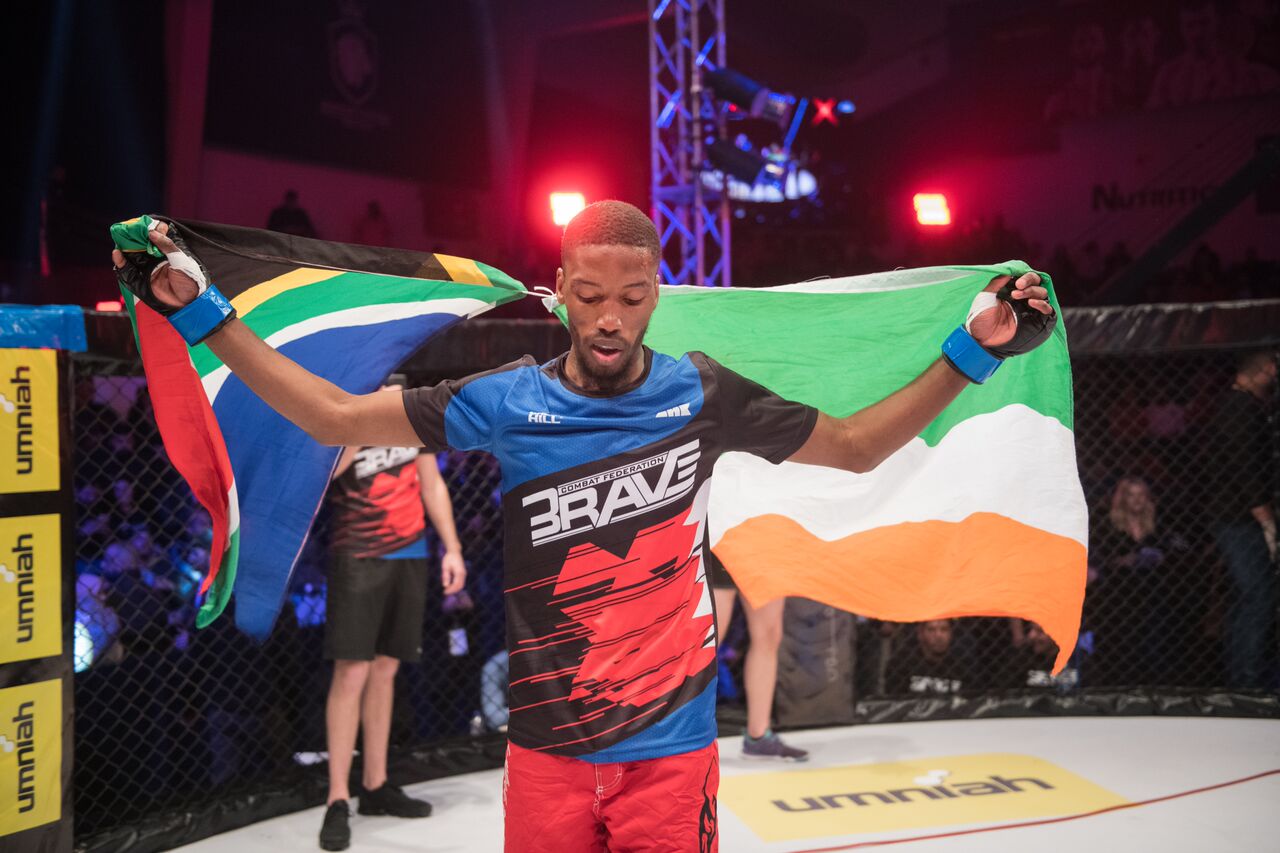 Frans Mlambo is a man on a mission. Signed on to fight for the Brave Bantamweight title against current champion Stephen Loman, “The Black Mamba” will be headlining Brave 13: Europe Evolution, in Belfast, Northern Ireland and hopes to come out of the event with a shiny new belt.

But there’s more on the line than a championship. Loman was responsible for Mlambo’s first and only defeat inside the Brave cage and, while Frans admits his opponent is a “good guy”, revenge will definitely be on his mind when the two meet on June 9th, at the SSE Arena.
“I obviously know him, and I do think he’s a good guy, but I feel he has what’s mine. He’s got my belt at the moment. I’m not gonna say that I’ll knock him out this time around, but I can safely say a decision win is not in my plans. I can guarantee it will be different from the first time we fought. I was on a winning streak before my fight with Loman and he owes me that win. I was doing really great and that train kind of stopped with him”, says Mlambo, in an interview with MMA UK.
Representing Dublin and fighting out of the world-famous SBG Ireland, Mlambo will have the opportunity to fight in front of family and friends next to his country. And though he concedes that fighting near home feels good, he doesn’t necessarily think that’s an advantage.
“It’s definitely good to have friends and family around during fight week, but it doesn’t really make a lot of difference to me. I’m used to fighting abroad and I’m always focused on the guy in front of me when the cage closes”, guarantees the title challenger.
Brave 13: Euro Evolution will be held at The SSE Arena, in Belfast. The main event will be a rematch for the Bantamweight title as current champion Stephen Loman tries to go 2-0 against challenger Frans Mlambo. The co-main event is set for a Catchweight of 73 kg between former UFC fighter Norman Parke and Myles Price.
Northern Ireland will become the ninth country to host a Brave Combat Federation, after Bahrain, Brazil, United Arab Emirates, India, Kazakhstan, Mexico, Jordan, and Indonesia.
Brave 13 full fight card:
Bantamweight: Stephen Loman (c) x Frans Mlambo – For the title
Catchweight (73 kg): Norman Parke x Myles Price
Welterweight: Karl Amoussou x Rodrigo Cavalheiro
Flyweight: Andy Young x Bryan Creighton
Featherweight: Declan Dalton x Zack Zane
Catchweight (80 kg): Sidney Wheeler x Mohammad Fakhreddine
Lightweight: Abdul-Kareem Al-Selwady x Erik Carlsson
Middleweight: Konrad Iwanowski x Glenn Irvine
Middleweight: Chad Hanekom x Tarek Suleiman
Catchweight (73 kg): Cian Cowley Daniel Olejniczak
Catchweight (79 kg): Ben Bennett x Adam Byrne
Featherweight: Piotr Tokarski x Sam Slater
Featherweight: Aidan James x Tommy Martin