BRAVE 9 – The Kingdom Of Champions: Live review and results

We’re live from the Khalifa Sports City, for the biggest night in Middle East MMA. Brave 9 has pulled out all the stops in putting up a stunner of a card, with two titles up for grabs. Unfortunately, the fight between Elias Boduegzdame and Lucas Matrins getting scrapped, with the challenger failing to make weight.

Three fighters will be representing India on the card, with Atif Mohamed facing Haider Farman, while Mohammad Farhad will face his toughest test to date, in the form of local hero, Hamzah Kooheji. Stay tuned, as we will bring you all the up – to – date results, live from the Khalifa Sports City in Bahrain. 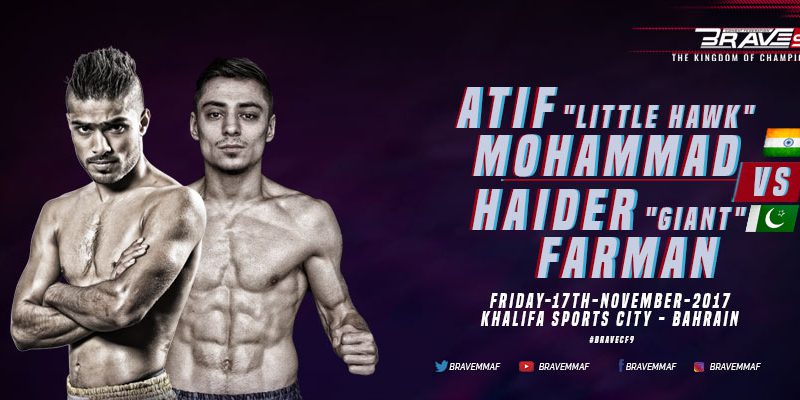 In the first round, Atif tried to whip in a leg kick, but his opponent took him to the ground, and tried to synch in an RNC. Haider secured the back mount, but Atif managed to hang on, and got out of the predicament. After resetting briefly, both the fighters engaged on the feet, with Haider connected with a crisp left hook. Both the athletes then briefly traded in a Thai clinch, only for Haider to take Atif to the ground. Haider finished the round strong, keeping Atif guessing with his lead leg kicks.

The second round began with a flurry, as Haider connected with some crisp combinations in the pocket, and kept chipping away with leg kicks to establish his distance. Atif tried to explode from the outside, but with the range advantage, Haider picked apart his opponent. Haider looked for the left high kick – right overhand combination, but Atif managed to stay in the fight. Haider once again took Atif to the ground in the final minute, as both the fighters finished the round with a flurry of overhand rights, with almost all of them missing the mark.

Atif, knowing he needed a finish, came in within the striking range, but Haider kept chipping at him with lead leg kicks. Haider connected with a nice one – two to fend Atif away, but the Indian strawweight kept answering with combinations of his own. Haider kept pushing the pace, and did enough to secure a unanimous decision victory.

Pacatiw, who previously defeated Chaitanya Gavali at BRAVE 5, once again showcased his excellent range in striking, and controlled the pace of the fight. However, in the last minute, Jalal connected with an overhand right, which left Pacatiw prone on the ground. Jalal swarmed in and finished Pacatiw with a barrage of punches!

Winner by TKO in round 1: Jalal AL Daaja

The SBG Ireland fighter came in with a specific game plan, smothering Leary with his pressure in the clinch. Leary and Scatizzi struggled to get the dominant position on the ground, and Scatizzi, after almost securing the top mount, managed to get the better of the exchange in transition on the feet, ending the round in a dominant fashion.

At the beginning of the second round, Scatizzi once again shot in, as both fighters jockeyed for position yet again. In the third minute, Scat almost had the guillotine synched in, but Leary kept his composure, working with body shots, and found himself on top! Leary ended the round on top, with a flurry of punches, as Scatizzi managed to scramble and get to his feet.

In the third round, Scat once again went for a takedown, but was well scouted this time around. Leary then pounded on him, and finished him via TKO.

Winner by TKO in round 3: Charlie Leary 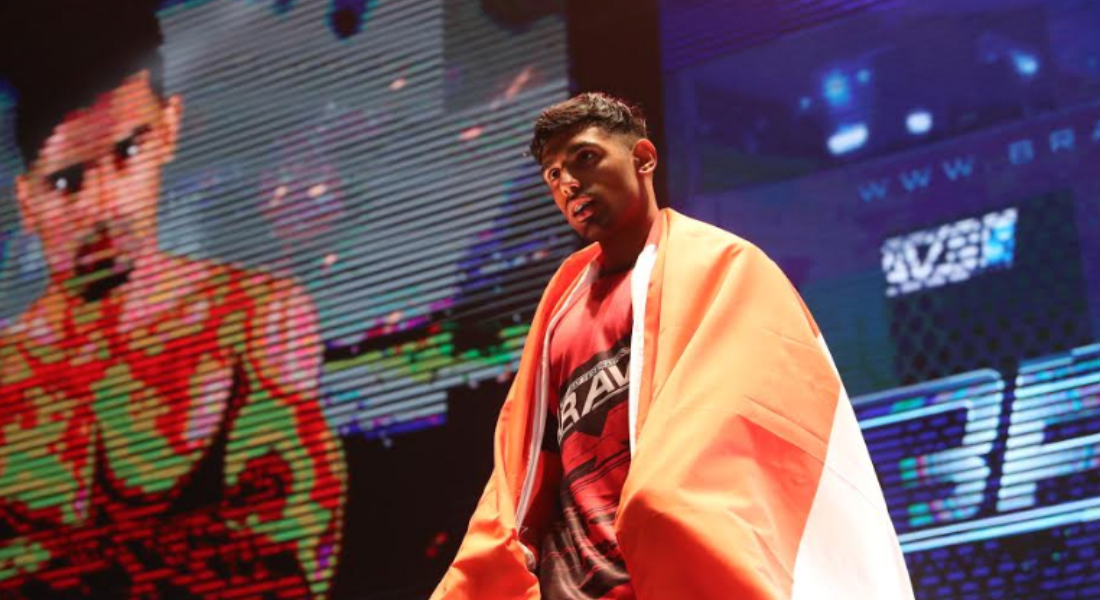 Rai tried to measure the distance, facing a taller opponent with longer range. Rai kept trying to close the distance and pile on the pressure, while moving out of the line. Rai came in and connected with a haymaker, dropping Patterson to the mat. Rai then rained down with hammerfists as the referee stepped in.

Winner by TKO in round 1: Hardeep Rai 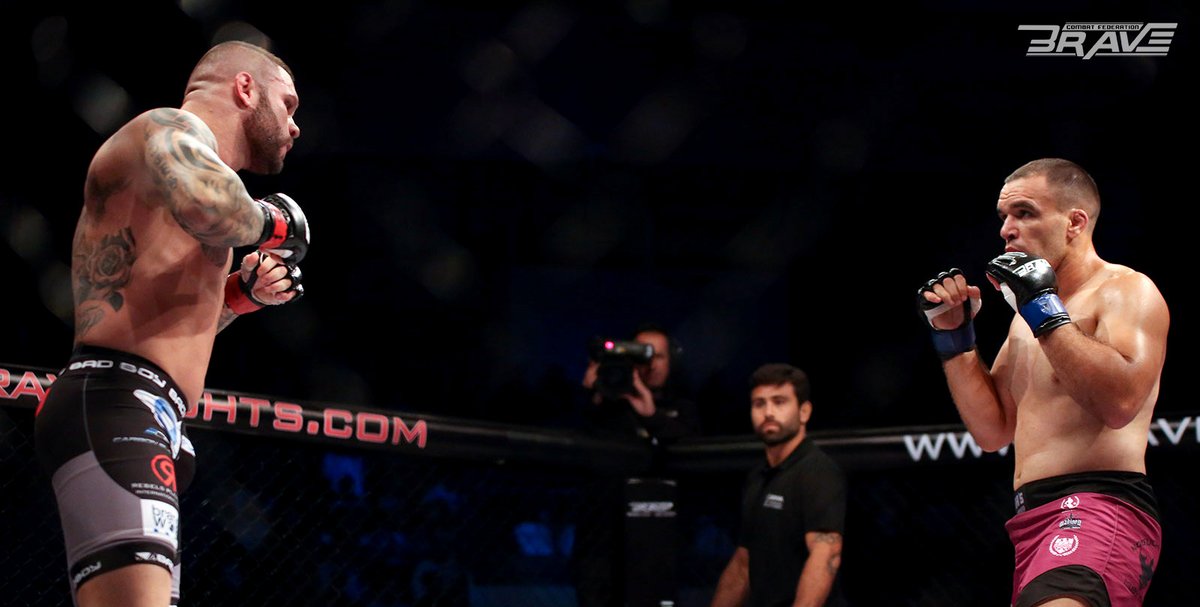 Jeremy and Ikram scouted each other, as Ikram tried to throw high kicks to unsettle Jeremy. The South African was soon cut open near his eye, as Ikram connected with a powerful overhand right to drop Smith! Ikram swarmed in, but the referee stopped the fight, while Jeremy looked to have been intelligently defending himself.

Winner by TKO in round 1: Ikram Aliskerov 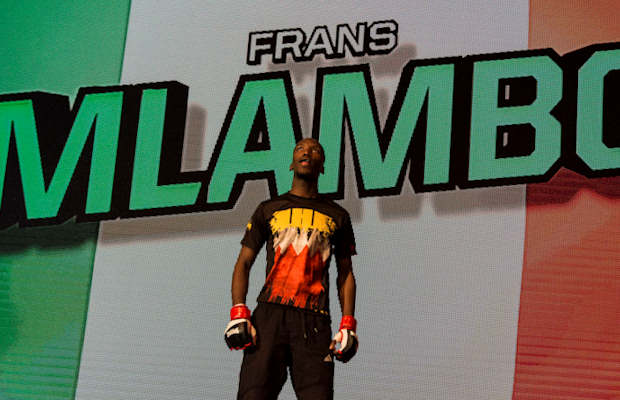 In the opening minutes, the South African native caught Michael with a hook coming in, sending him crashing to the mat. The referee stepped in to stop the contest.

Winner by TKO in round 1: Frans Mlambo

Ahmed controlled the action in the clinch, as he tried taking Erik down. However, Erik showed excellent takedown defense, stopping Ahmed from tripping him to the mat. Amir managed to secured Erik’s back, as both men jockeyed for position against the cage. Amir connected with a few knees to the head, and took the round with ease.

In the second round, Carlsson dropped Amir with a big right, but Amir managed to get him in half – guard. After a brief scramble, Amir suplexed Carlsson, and worked on him on top position, coming down with elbows and punches, to end the round in a dominant fashion.

In the final round, there was a decisive moment, when Carlsson connected with a front kick, that landed flush on Amir. Both the fighters failed to engage after a brief period of action, prompting Marc Goddard to step in, and warn Amir. The round ended with Carlsson being the more dominant fighter, but Amir won the first two rounds to take the fight by split decision. 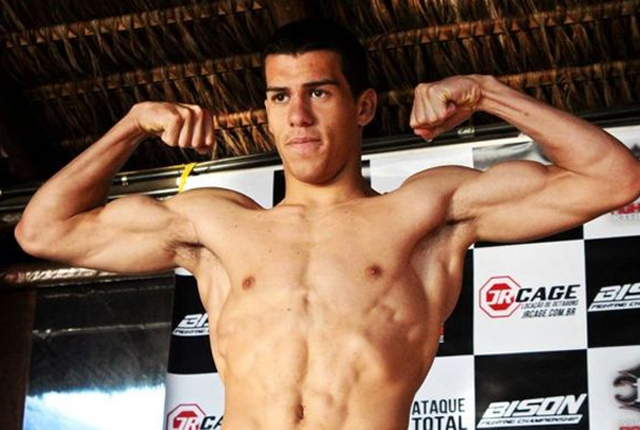 Felipe showed absolute precision and finesse in his fight, as he tried to connect with multiple high knees. Felipe chose to stand with in boxing range and trade, and caught Nawras flush. He then finished his opponent with yet another knee to the head, as the referee stepped in to stop the fight in the first round.

Winner by TKO in round 1: Felipe Efrain

The first round of the fight went the way one would’ve expected, with Farhad trying to stand and trade with Hamza, while the Bahraini fighter going for takedowns, and trying to subdue Farhad on the ground, and against the cage. Kooheji takes the first round, albeit neither fighter did anything substantial.

In the second round, Hamza once again went for the takedowns, and Farhad grabbed the cage on multiple occasions. The referee stopped the action, and gave Farhad an official warning. Towards the end of the round, Hamza took control of Farhad’s back, tripped him and almost locked in the RNC with body hooks, but Farhad managed to hang on till the end of the round.

It was rudimentary in the third round, as Hamza once again took the action to the ground. Farhad briefly mounted a comeback, and tried to go for an arm bar in the dying seconds, but Kooheji comfortably won the round — and the fight. 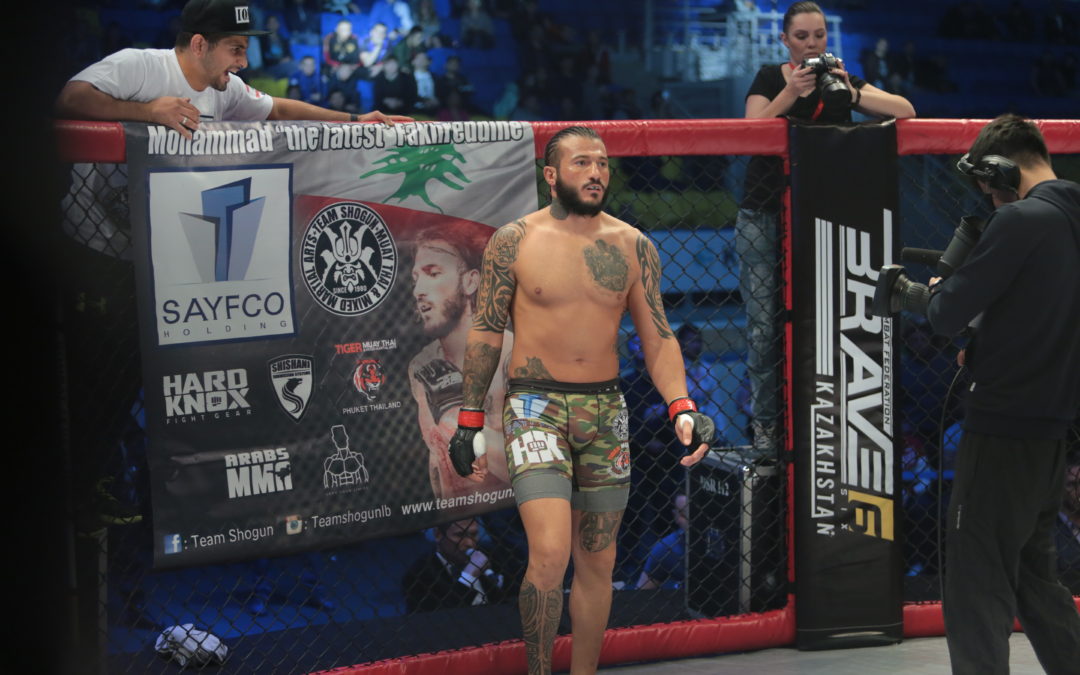 Both fighters were hesitant to engage in the early going, but all that changed when Hadbi unintentionally kicked Mohammad in the groin. Mohammad then shook off the cobwebs, as both men then stood and traded blows, bringing the round to an exciting end. Hadbi did more damage in the round, and probably would edge Mohammad on the score cards in the first round.

In the second round, both men initiated a clinch once again, as Hadbi unintentionally kicked Mohammad in the groin for the second time, rendering him unable to continue. The fight ended in a no contest.

Al Selwady established range in the early going, chipping away with leg kicks and crisp combinations. Both the fighters then traded strikes, as Al Selwady closed the distance and pushed Da Silva against the fence. However, Da Silva shifted his hips and turned it around, securing the back mount. Da Silva then turned him around and transitioned to the mount, and rained down with punches.

Al Selwady put the pressure on Da Silva in the beginning of the second round, once again taking him to the ground. He then connected with a beautiful switch kick, as Da Silva struggle with wrist control. The Lebanese fighter fired back with a hard right, but was immediately subdued by Da Silva. Al Selwady connected with a hard knee, cutting Da Silva deep, and the referee stopped the fight.

Both fighters tried to feel each other in the early going, as Cavalcante drilled his opponent with leg kicks. Omer and Gesias weren’t averse to trading in the pocket, and the Brazilian walked his opponent down. Both the fighters proceeded rather cautiously, as the round came to an end.

Both the fighters didn’t do much to push the pace in the second round, and the referee stepped in to ask the fighters to engage more.

The action picked up in round three, where Omer started moving out of the line and connected with a few combinations, but Cavalcante charged forward and took him down! Cavalcante caught Omer with a knee, but Omer fired back with shots, and finished him with punches.

Winner by TKO in round 3: Alan Omer

Al Salawe and Booth jockeyed for control in the clinch, which saw Booth using his range to his advantage. However, Salawe then took the British fighter to the ground, where he controlled the action, slicing him with elbows. Booth was cut under his eye, as Salawe finished the round in a dominant fashion.

The second round saw Booth maintain his range and his posture, not getting himself too close to Al Salawe. Booth worked in the range, but Jarrah once again managed to get inside and initiate the clinch, and took “The Bomber” down. Jarrah managed to get top control, while Booth worked tirelessly in his defensive guard. Al Salawe once again had the upper hand as the bell rang, signalling the end of the round.

Al Salawae continued to use his wrestling to subdue Booth, as the action lasted on the ground for the majority of the third round. Jarrah did enough to win by unanimous decision.

Gurudarshan Mangat versus Stephen Loman for the BRAVECF Bantamweight Championship 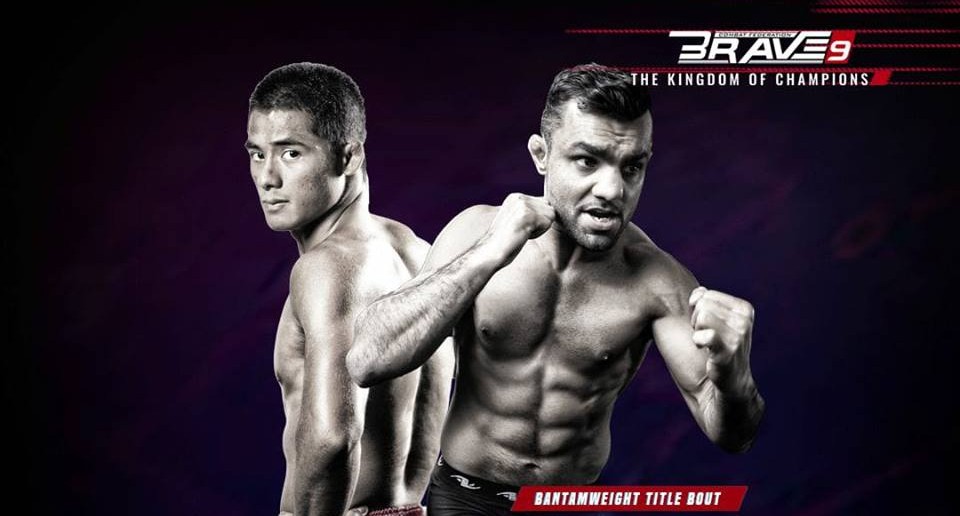 The Philippine fighter weathered the storm in the early going, as Gurdarshan tried to go for a takedown. Once both men got back on their feet, Loman tagged Mangat with a left hook, sending him crashing to the mat. The referee then stopped the contest, as Stephen became the inaugural BRAVE CF Bantamweight Champion!

Winner by TKO in round 1 and BRAVE CF Bantamweight Champion: Stephen Lomar

Both the competitors got off to an explosive start in the first round, as Ottman connected with some excellent shows and a knee to the head, while Alejandro returned the favour with a solid left hook. Ottman ended the round strong, connecting with a series of combinations, staggering Martinez.

Both the fighters once again exploded in the beginning of the second round. However, Martinez showed signs of fatigue, as Ottman continued to work behind his jabs, and later connected with a perfect over hand right! The Morocco native ended the second round strong, as Martinez began to fade.

It did not take Ottman long to finish the job in the third round, as he connected with a one – two, followed by an oblique kick to the mid section, that sent Martinez to the ground.

Winner by TKO in round 3 and BRAVE CF Lightweight Champion: Ottman Azaitar