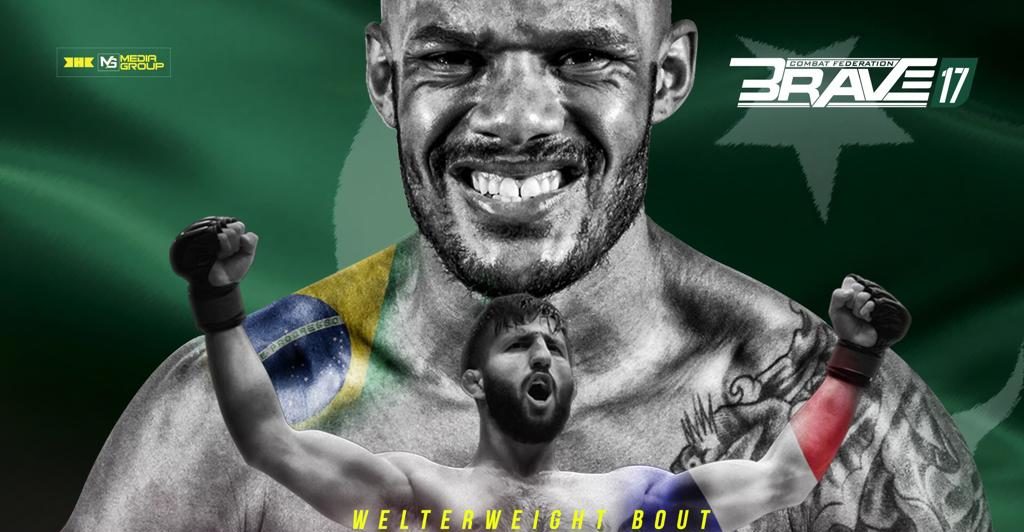 After a dramatic event in Abu Dhabi, which saw two new champions crowned, Brave Combat Federation heads to Pakistan on October 27th, with its two most important bouts finalized. The promotion announced that welterweight contenders Rodrigo Cavalheiro and Abdoul Abdouraguimov will fight in the main event of Brave 17, set for the city of Lahore.
The winner will most likely be the first contender to new champion Jarrah Al-Selawe. Cavalheiro has impressed since joining Brave CF as the veteran brazilian has won his two promotional bouts by violent knockouts, including a KO of the year candidate against Karl Amoussou.

Abdouraguimov, meanwhile, has one win under the Brave banner as he steamrolled Sidney Wheeler with violent ground and pound in the main card of Brave 14, which took place last month in Morocco. “Sinistro” is known for his strong jiu-jitsu and violent strikes from the guard and is undefeated as a professional mixed martial artist, with eight wins and one no contest in nine bouts.

In the co-main event, Brave will extend the record for Jeremy Pacatiw. The filipino standout is already the fighter with most promotional appearances and will take on Uloomi Kareem Somchai for his seventh Brave bout, going clear from Al-Selawe, who’s also six fights into his Brave career.
Pakistan will be the twelfth country to hold a Brave Combat Federation event, after Bahrain, Brazil, United Arab Emirates, India, Kazakhstan, Mexico, Jordan, Indonesia, Northern Ireland, Morocco, and Colombia. South Africa and Saudi Arabia are also set for Brave events in december.