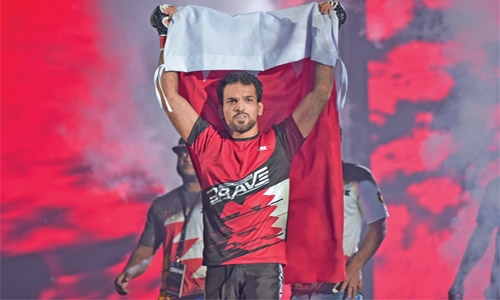 In the co-main event, the pride of Bahrain Hamza Kooheji put on a dominant performance against Nahuel Gandolfi who was no match for him in stand up and on the ground. With his home crowd support behind him, Hamza was relentless in his pursuit to finish the fight early. He landed a big head kick early in the opening round, but Gandolfi ate it like it was nothing. Once he got Gandolfi pinned to the cage, he took him down and put him there until the round ended. Gandolfi just managed to survive but in the process ate a lot of punches from the top.

Gandolfi tried to shift the momentum in the second round with his own take down, but with this excellent wrestling Hamza was able to fend off any attempts. Once Hamza had the top position, he just continued to hammer Gandolfi and land elbows. Gandolfi’s attempts to submit Hamza from the bottom were met with more punches. In the final round, Hamza got hold of the crucifix and rained down elbows until the referee stepped in to stop the fight at 1:44 secs of round 3.