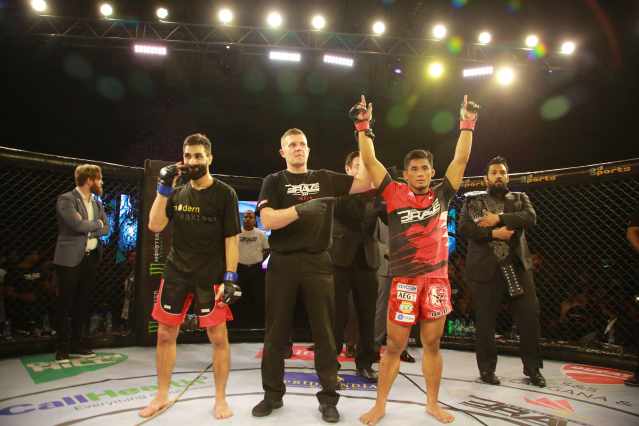 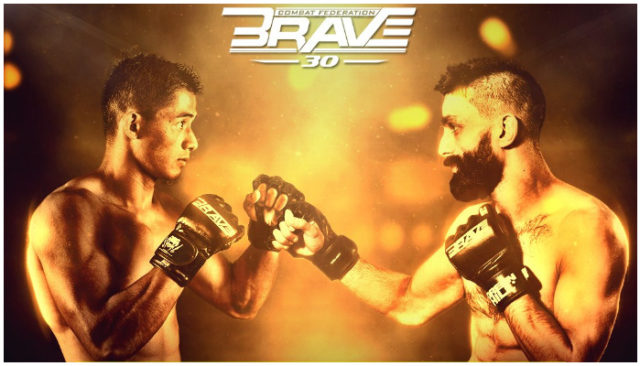 In the main event, the reigning bantamweight champion Stephen Loman of Philippines defended his title for the fourth consecutive time and retained the belt with a unanimous decision victory over Louie Sanoudakis. Loman put on a performance that saw him dominate Louie for five rounds and showed why he is considered one of the best bantamweight champion to step inside the cage. Loman used his excellent defense and leg kicks to neutralize Louie in the initial rounds. But when Louie began to let loose and land his own leg kicks, that’s when the rounds heated up. Loman continued his offense and kept Louie busy on his feet who was somewhat lost and didn’t have an answer to The Sniper’s aggression. By the end of the fifth round, Louie realized he was behind the scorecard and needed to immediately stop Loman. But it was too late and the Canadian fighter was unable to employ his game plan.

“I would like to thank everyone who has helped me. To Indian fans, I love you. My coaches, training partners, family, and friends, and to BRAVE CF for allowing me to do what I do. Right now, I have a lot of people to fight still, maybe one day I’ll go up in weight.

In the co-main event, Phil Hawes put on a flawless debut as he took down Dominik Schober and forced him to tap with a rear-naked choke in the first round. Immediately after his win, Phil expressed his desire to be the first challenger to the Middleweight title that will be up for grabs in two weeks’ time at BRAVE CF 31.

The Indian fans experienced a mixed bag of emotions as two of their heroes fell short against foreign talent. Manjit Kolekar lost to Samin Beik via doctor stoppage after she suffered a cut on her left eye brow while Bhabajeet Choudhury was submitted by Martin Hudson in a first-round after he was knocked down in a wild exchange.

Manjit suffers an accidental headbutt and gets cut over her left eyebrow @bravemmaf #BraveCF30 pic.twitter.com/LYdD18GoY8

Martin Hudson makes a huge statement by dropping Bhabajit in the first round and then forcing him to tap out. He just silenced the whole stadium. @bravemmaf #BraveCF30 pic.twitter.com/7VfYBElX26

Fans cheered when they witnessed Mohammad Farhad making a big statement on his Brave CF return as he stopped fellow Indian Kushal Vyas with a leg kick TKO in the first round.

Khantharaj Shankar Agasa on the other hand had to grind his opponent for the entire three rounds to pick up a unanimous decision win.

The event also featured other upcoming Indian MMA fighters who squared off against each other. Kicking off the preliminary card were Satya Behuria and Pathian Pmsdawngliana which ended in a quick submission

Kuldeep Singh blazed through his opponent Shankar Mehta after he took him to the ground and unleashed some heavy blows forcing the referee to stop the fight.