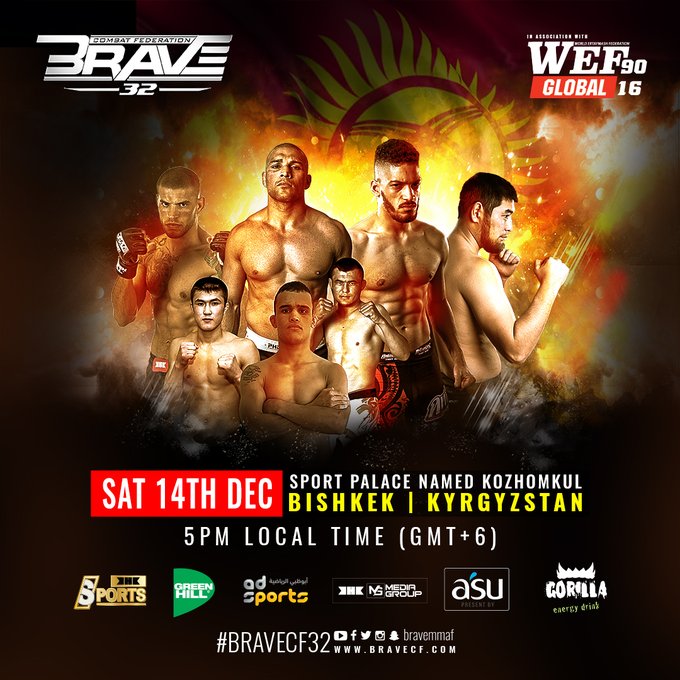 The fastest-growing MMA organization in the world will land in new territory yet again. On December 14th, BRAVE CF 32 will take place in Bishkek, Kyrgyzstan, in partnership with WEF Global, and will feature an explosive Catchweight bout between debutant Hayder Hassan and returning top striker Carl Booth.
Wrestler Hassan is one of the latest signings for BRAVE Combat Federation and will get a tough assignment for his debut, as he takes on one of the most feared strikers in former Welterweight contender Carl Booth, who returns from a year-long layoff after a brutal knockout win over Dino Bagattin at BRAVE CF 19 last year.

The debut in Kyrgyzstan will also feature the return of Super Lightweight sensation Leonardo “Macarrão” Mafra, who takes on local hero Kubanych Abdisalam, as well as the debut of Brazilian top prospect Daniel “Willycat” Santos who faces off against Nizambek Zhunusov.
BRAVE CF 32 takes place on December 14th, at the Sport Palace Named Kozhomkul, as BRAVE CF ventures into Central Asia, and makes its debut in yet another new territory.

Previous article
Luke Rockhold not interested in a rematch with Chris Weidman
Next article
ONE: EDGE OF GREATNESS OFFICIAL OPEN WORKOUT PHOTOS AND QUOTES