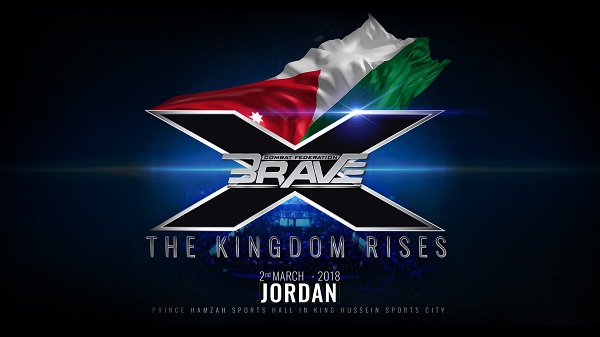 After announcing Brave Combat Federation’s first trip to Jordan, set for March 2nd, at the Prince Hamzah Sports Hall at King Hussein Sports City, president Mohammed Shahid has hailed the local fans for their push into making Brave the first major MMA event to venture into the country.

The promotion has some of its biggest stars coming out of Jordan, such as Jarrah Al-Silawi, Abdul-Kareem Al-Selwady, among others. Shahid hopes for a packed house for Brave 10: The Kingdom Rises and says that Jordan has always been a priority destination for Brave Combat Federation.

“Jordan has one of the most fantastic crowds for MMA worldwide, hands down. The country was a must-go for us at Brave Combat Federation and I’m positive it’ll be the ultimate statement of our position within the region. Brave is the strongest platform for athletes, coaches, and fans in the Middle East and we’re looking to expand this platform to where there are talent and interest in developing the sport. This is at the core of our vision”.

Shahid hopes that Brave 10, as a truly global event, will make for a unique experience for everyone involved, from fans to fighters and the promoters.

“As I said, Jordanian fans are some of the most passionate in the world but, despite that, they’ve been missing an MMA event for a while now. With Brave 10 we will be taking the truly global promotion to these fans, it’s going to be a unique experience for all of us, fans and promoters. We’re bringing MMA back to Jordan!”, exclaimed Brave’s president.