Brazilian MMA promotion, Mr. Cage books a fight between a transgender woman and a man

It is often said that sports is for everyone. No matter who you are, rich or poor, man or woman, you will find your heart inclined towards a particular sport. The story of Brazil’s Anne Veriato is quite unique, she says that she is different from others but has found her heart inclined towards MMA. Veriato is a transgender woman and will compete against a man in the Brazilian MMA promotion, Mr. Cage. 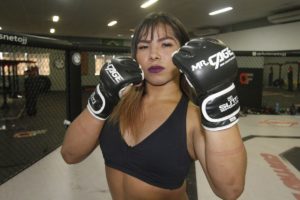 Veriato is scheduled to fight Railson Paixao at Mr. Cage 34 in Manaus, Brazil. The event will be headlined by former UFC fighter and MMA veteran Henrique da Silva. Silva is a highly popular fighter in Brazil. However, the spotlight has all gone towards the strawweight bout between Veriato and Paixao.

In a recent interview given to MMA Fighting, Veriato shared her journey about the tough times she has faced. Here’s what she had to say:

“I’ve been fighting jiu-jitsu for years, and I wanted to do something different, a lot of people in my team fight MMA already, and I wanted to do it as well. When I entered the mat to compete, they always thought I was in the wrong category, asked for documents and everything, my opponents and their teams always said ‘You’re fighting her? Ok, this is going to be easy.’ Every time I won, they would come up to me and apologize. I kept competing and winning tournaments, and people started to respect me.

It was a bit hard for people to get used to it in the gym, I left the gym for a while and when I came back, no one recognized me. It’s all good now because they were used to it, but it was different in tournaments.”

Veriato’s story is truly inspiring. Hopefully, she can be an icon and a role-model for a lot of other people.

Devin Powell gets his testicle ruptured by Joe Lauzon in training