Conor McGregor, the UFC Lightweight Champion, was spotted arriving in Brooklyn at the Barclay’s Center for UFC 223. 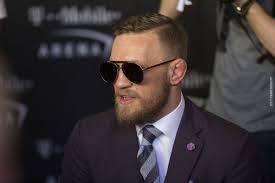 MMA India Show received shot footage of the Irishman arriving, surrounded by his entourage. He was also quickly thronged by a group of fans that spotted him.

You can watch the video here:

Conor McGregor isn’t scheduled to fight at UFC 223, despite Max Holloway stepping up from Featherweight to face Khabib for the UFC Lightweight Championship that the Irishman currently holds.

Only earlier today, UFC President Dana White announced in the UFC 223 pre-fight press conference that McGregor would be stripped of his Title so that Max and Khabib can duke it out to determine a new champion for the division.

McGregor last fought Floyd Mayweather in a boxing super fight in 2017. His last UFC fight, when he won the Lightweight Title against Eddie Alvarez at UFC 205, was in December of 2016.

McGregor showing up for UFC 223 could be in reaction to White’s announcement earlier today, or to support teammate Artem Lobov who is fighting on the card.

Ariel Helwani updates us on the situation.

I’m told some of the fighters who were on the van are “shaken up.” They are still at the arena and Dana White, as well as local authorities, are there now.

It would seem that McGregor was particularly incensed by Khabib and his teammates targetting and slapping Artem Lobov in the hotel lobby yesterday.

Helwani also tweeted out that McGregor threw a chair into the van in question, cutting Michael Chiesa who was also in there.

According to multiple sources Michael Chiesa suffered a laceration in the fracas. He is being attended to at the arena. Unclear at this time how serious his injury is.

It is also now rumoured that McGregor will face criminal charges for his actions.